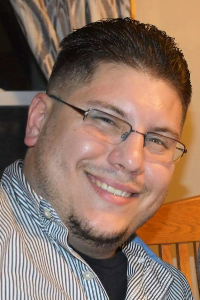 Michael is predeceased by his grandmother, Norma O'Brien; grandfathers, James Cimochowski and Roberto Santos Rojas and his step-grandfather, Albert LeBoeuf.

Michael was born in Worcester and raised in Millbury, he graduated from Millbury High School. He worked throughout his life in the culinary field and loved being a part of the fast-paced environment of the kitchen. He was a natural born leader who inspired many, before his passing he held a position at the 110 Grill in Marlborough as a culinary manager.

Michael was a very charismatic and outgoing son, brother and friend. His infectious smile always brought laughter and lighthearted energy to everyone around him. Mike was a proud father to his son Lincoln who was the center of his world. He was known for his spontaneous adventures, rambunctious energy and being the life of the party. Michael was always bringing people together and making the best out of every situation. He was always there for his family and friends whenever they were in need. He enjoyed playing darts and was an active member in several leagues including Worcester Dart League, Minuteman Dart League, Screaming Eagles, Breakfast Club and Ware River Dart League, and his favorite yearly event to play in was The White Mountain Classic. Mike enjoyed video games, beach trips and hiking. He loved football and played as a linebacker for the Millbury Woolies during his time in Highschool.

Michael’s memory will live on in the hearts of everyone who loved him.

A Funeral will be held on Friday, July 29, 2022 from DIRSA-MORIN FUNERAL HOME, 298 Grafton Street, Worcester with a Funeral Service at 10:30AM in FIRST BAPTIST CHURCH OF WORCESTER, 111 Park Avenue, Worcester. Calling hours will be held on Thursday, July 28, 2022 from 6:00 to 8:00 PM in the funeral home. Burial will be private. In lieu of flowers, memorial contributions may be made to www.gofundme.com/f/lincoln-mcfee.