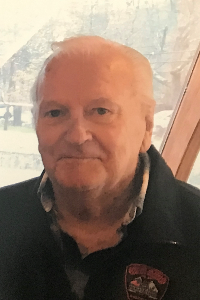 Robert D. Chasse, 85, of Church Street, Greenville, formerly of Warwick, passed away surrounded by his family on Thursday July 21st in his home. He was the husband of Jacquelyn R. (Leonard) Chasse. They had been married for 60 years.

Born in Providence, a son of the late John and Laura (DeLobbe) Chasse, he had lived in Greenville for 15 years previously living in Warwick. He honorably served in the United States Marine Corps.
Bob was the owner of Eastern Erectors, a prefab metal building construction company.

His funeral will be held Thursday July 28th at 9am from the Anderson-Winfield Funeral Home, Route 44 at Greenville Common, Greenville. A funeral service with military honors will be held at 10:30am in the RI Veteran’s Cemetery, Exeter. Visitation will be Wednesday July 27th from 5-7pm. In lieu of flowers donation in his memory may be made to Hope Hospice and Palliative Care, 1085 North Main Street, Providence, RI 02904 www.hopehealthco.org Hope Hospice and Palliative Care