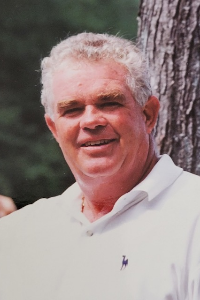 Of North Andover, on July 12, at age 82, a legendary member of the New England Section of the PGA, inducted into its Hall of Fame in 2000, and an icon of the Greater Boston golf community for more than a half century, after a short illness.

Paul is survived by his devoted wife of 53 years Nancy M (Galeazzi) Barkhouse, cherished daughter; Tracy Lee Winter, 3 absolutely loved and enjoyed grandchildren; Savanna Winter, Dagan Winter and Vin Winter, brother and sisters-in-law Richard and Marianne Galeazzi and Sharon Longo, brother-in-law and partner; John Longo and Darrah Ostrander, sister; Maureen Stenuis and her husband Fred and many beloved nieces and nephews of all generations. Paul is pre-deceased by his sister Denise Fessenden and her husband Roger.

Paul was a US Army veteran, entering the military at Boston, Massachusetts, on April 9, 1963 and receiving his honorable discharge from Fort Hamilton, New York on March 27, 1965. He had worked as a Police Officer while in the military.

Paul was a great player (see below), a grand friend to all and a highly respected face of the game wherever he traveled. Once you met Paul, you were a friend for life. His adoring sense of humor was highly infectious to all that it touched.

He was an acclaimed teacher of the game who was always ready to help a young golfer improve by providing instruction and counsel, often without charge, on the practice tee. Nothing made him prouder than to see his proteges succeed in the business of golf, most significantly long-time PGA club professionals John O’Connor, Brian Gilchrist and Paul Ballard.

Paul did not care to take credit for, but he was instrumental in convincing bank president Bob Spiller to bring the LPGA Tour to his home Ferncroft Country Club in the form of the Boston Five Classic that ran from 1980 through 1990.

Paul was actively involved on every level of the NEPGA, constantly striving to improve the Association and the delivery of services to its members. His leadership abilities and his strong desire to improve the Association inspired him to service within the New England PGA . Notably, he served as vice president on the Executive Committee from 1977 through 1979 and as chairman and co-chairman of the Tournament Committee from 1978 through 1985. He served as president of the Seniors’ Chapter for 15 years and was instrumental in delivering quality, sponsored tournament events and improving communication within the organization. Paul received the coveted NEPGA Professional of the Year award in 1981 in recognition of his outstanding performance and achievements as the ideal club professional and was honored as the New England Section’s Merchandiser of the Year in 1980 and again as the Southern Ohio Section’s Merchandiser of the year in 1989.

As a member of the New England Section of the PGA since 1968, Paul’s playing achievements were legendary. He was one of the best and most consistent players in NEPGA history. He earned the Eugene “Skip” Wogan Award Player of the Year trophy twice, in 1969 and in 1977 for overall excellence in playing achievements.

In 1979 and again in 1980, Barkhouse teamed with Paul Harney to win the NEPGA Senior- Junior Championship. In 1980, he also played in another Senior-Junior Championship, PGA of America’s, and took home National champion accolades. Paul won the NEPGA Individual Match Play Championship twice, in 1981 and 1984. The Pro-Pro Stroke Championship ended with Paul at the top three times, in 1979 with partner Les Bond, and in 1982 and 1997 with partner Paul Parajeckas. He also teamed with Parajeckas in 1984 to win the Pro-Pro Match Play Championship. Not only has Barkhouse won numerous individual and team championship events, beginning in 1966 when he won the Assistants’ Championship, he earned championship laurels in open events six times: He won the New Hampshire Open in 1969 and 1977, the Maine Open in 1972 and 1974, the New England Open in 1975 and the Massachusetts Open in 1976. Barkhouse won the PGA Club Professional Series in 1980 and has played distinguishably in numerous U. S. Open, PGA Tour, PGA Senior Tour and PGA Championship events. He earned the NEPGA Senior Chapter’s Player of the Year award in 1998 and 1999. He consistently demonstrated unwavering commitment to making golf a better game and in service to the New England PGA. Paul was a true ambassador of the game.

Paul’s Funeral Mass will be celebrated in St. Michael Church, 196 Main St., North Andover on Tuesday, July 19 at 11:30 AM. Relatives and friends are most welcome to attend. Calling hours will be held in the Burke-Magliozzi Funeral Home, 390 North Main St., Andover on Monday, July 18, from 4 to 8 PM. Donations in Paul's memory may be made to the Francis Ouimet Scholarship Fund, 300 Arnold Palmer Boulevard, Norton, MA 02766. Interment will be privately held. For additional information, please visit, www.burkemagliozzi.com.