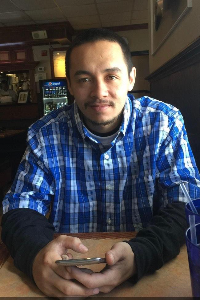 Whether you called him D-Block, Scrappy or just Derek, you knew right away you had a friend for life. Loyalty, love and laughter always were and always be the hallmarks of Derek Martineau’s life. While Derek’s time with us was tragically cut short on Sunday July 10, 2022, his 35 years on this earth could fill two lifetimes. And that’s a fact.
Derek Robert Martineau came kicking and screaming into the world on September 27, 1986 right here in Woonsocket and remained a lifelong resident of the city. Derek is the son of Siravout Sakousack and Karen Jeanne Belanger Martineau both of Woonsocket. After high school Derek worked in the welding trade. In more recent years he was employed with Bouckaret Industrial Textile Company.
Derek lived a full and active life. Some of his favorite activities were playing soccer and fishing. The best of times were spent camping at George Washington campground in Chepachet. Derek was proud of both his Laotian and French-Canadian heritage. A real gifted chef in the kitchen he could cook up a storm especially creating meals based upon Laotian cuisine. Anyone who knows Derek will know that his favorite color is blue.
Hands down Derek was an awesome and loving dad to his kids. He liked chillin’ with “The Homies” his siblings and friends. They will forever keep Derek’s memory close to their hearts. While Derek will be sorely missed and forever loved, his friendly and outgoing personality will remain in the hearts of those who were lucky enough to call Derek their friend.
PEACE OUT ChecCz!!!!!! WATCH OUT FOR ALL OF US FROM HEAVEN!!!!!
In addition to his parents Derek is survived by his children Derek, Jacob, Skylah, and Janasia Thifault. His wife Nateesha Thifault, his siblings Joshua and Andrew Martineau, Alberto Gutierrez, Stephanie, Tanasith and Tiphakone Martineau, his mother-in-law Karen Thifault and many aunts, uncles, cousins and friends. He was the grandson of the late Robert and Lorraine Martineau and his Dad’s parents who passed away in Laos.
Everyone is invited to gather to honor and remember Derek at visiting hours on Saturday July 16, 2022 from 1:00-5:00pm at Menard-Lacouture Funeral Home, 127 Carrington Ave. Woonsocket.
www.menardfuneralhome.com