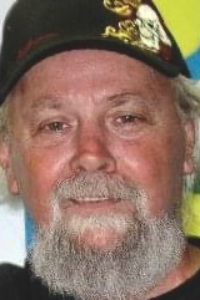 Robert B. Bigelow, 72 of Durham, ME passed away on Thursday, July 7, 2022 at Maine Medical Center.
He was the husband of Terry L. (Abell) Bigelow, to whom he was married for 22 years.
Son of the late Clinton C. and Barbara Bigelow (nee Watkinson)
Bob enjoyed riding his many motorcycles, and was happiest when around his family.
Survivors along with his beloved wife include his daughters Jodi Helger of Tiverton RI, and Bridget Bowling of Gardiner, ME; a stepdaughter Jaime Johnson, his sister: Susan Daponte of Greeneville, TN; his granddaughters Evelyn, Sera, Olivia, Madison, Lillian; a grandson Benjamin, and several nieces and nephews, aunts and uncles, along with the many friends he’s made throughout his years.
He was the brother of the late Walter F, Michael P, Stephen B, and Kevin P.
Private arrangements have been entrusted to Chad E. Poitras Cremation and Funeral Service, Buxton, www.mainefuneral.com