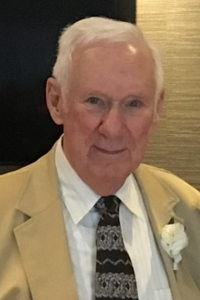 John was born August 10, 1931 in Cleveland, Ohio, son of the late Conrad Upholz and Theresa Upholz. He lived a vibrant, full life and was a Navy Veteran enlisted in the Submarine service April 10th ,1951. He served on the S.S. Skylark, S.S. Cod & S.S. Sablefish as an IC3. He attended Ohio State where he majored in Architectural. After college he started working for J.F. Neilan Architectural then on March 25th 1963 he started working for Electric Boat and retired after 39 years as a Senior Structural Submarine Designer.

John was a man of great faith. He had a warm sense of humor that brought a smile to everyone’s face. His kindness and loving, generous manner were known by all who knew him. He was a Minster of the Eucharist for Saint Mary’s Roman Catholic Church of Groton and a current communicant at Saint Patrick’s Roman Catholic Church, Mystic.

During his retirement years John along with his wife Jeanette both enjoyed creating beautiful oil paintings capturing the local landscapes. He and Jeanette first met in oil painting class at Mystic Art Museum and have continued painting together ever since. While both were established painters, they have had their paintings on display at the Garde Theater. Throughout his years he also enjoyed karate with his son, sailing, playing card with friends, and skyping with his brother Conrad of Ohio nightly.

John is survived by his wife: Jeanette Mayo-Upholz of 23 years; children: a son John D. (Yolanda) Upholz, a daughter Sandy Dyer and a step-son Brian (Michelle) Mayo; grandchildren Alicia (Rich) Amato, TJ (Alena) Dyer and Cody Dyer; step-grandchildren Marissa and Jake; great grandchild Evan Amato and many of the Upholz’s nieces and nephews in and around Ohio.
John is preceded in death by his wife: Elsie (Pettinari) Upholz of 39 years; siblings: Theresa, Fred, Kenny and Conrad Upholz.

Calling hours will be held on Wednesday, July 6, at the Dinoto Funeral Home, 17 Pearl St., Mystic from 8:30 am to 9:30 am. A Funeral Mass will be celebrated at 10 am at St. Patrick’s Church 32 E. Main St., Mystic. Burial with full military honors will follow at Elm Grove Cemetery 197 Greenmanville Ave, Rte 27, Mystic,

In lieu of flowers, donations may be made to a charity such as Hospice Care (Hartford Health Care at Home, Norwich Ct), St Jude’s Children’s Hospital or American Cancer Society.