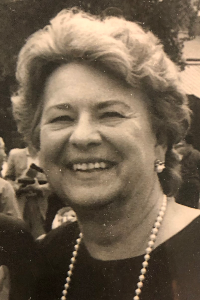 She was born in Webster, MA, daughter of Stanley J. Zlotnick and Stasia (Poswiatowski) Zlotnick. She attended Simmons College and then later graduated from Smith College and St. Louis University School of Medicine after receiving her Master’s degree and PhD in microbiology.

She pursued a career in science at a time when few women dared to and even fewer were successful in doing so. Her distinguished career began in the laboratories of the Massachusetts Department of Health working as a bacteriologist, continued at Hoffman LaRoche where she supervised the microbiology laboratories of the Quality Control Department in the pharmaceutical production area, and concluded at Lederle Laboratories where she served and retired as the Vice President of Quality Assurance/Quality Control.

In her retirement, she was a perseverant golfer, an occasional bridge player, and an avid reader of science magazines, murder mysteries and newspaper comics. She served at St. Pius X Church as a lector, eucharistic minister, soup kitchen volunteer, and as a founding member of the Caring Crafters. More than anything, however, she loved spending time with her family. She and her husband honeymooned on Cape Cod in 1976 and returned there every summer thereafter to celebrate their life together. She cherished time spent at the family lakehouse, large Christmas dinners, and any opportunity to visit with her grandchildren.

Visitation will be held on July 1 at Scanlan Funeral Home, 781 Newark Pompton Turnpike in Pompton Plains NJ and a Mass will be held at St. Pius X Church in Towaco NJ on July 2. A graveside service will be held on Tuesday, July, 5 at 11:00 AM in Saint Joseph Garden of Peace, Webster, MA.