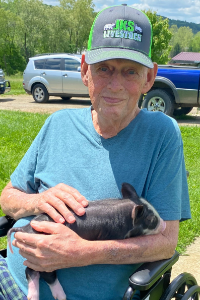 He wed Kathryn “Elaine” (Doty) Woods on September 16, 1960 and they have shared almost sixty-two years of marriage.

During peacetime Fred served in the US Army, which included being based in Germany for a year.

In his career as a sawyer, Fred worked for various lumber companies over the years. He retired from the Conrad Lumber Company of Rochester Mills, PA, where he enjoyed working for Gary Conrad.

Fred loved to hunt, be his prey coyote; deer; groundhogs or turkey. He was especially fond of spending time in the outdoors hunting with his two grandkids and hunting buddies. In fact, one of Fred’s favorite pastimes when he was not hunting, was to be sharing and trading hunting stories with other people.

Through the years, he and his wife had hosted four foreign exchange students in their home.

He was preceded in death by his parents; his three sisters: Mary Etta Keener; Edna Williams and Kathryn Parkin and his two brothers: Clifford and Richard Woods.

Family and friends will be received from 2:00 – 6:00 p.m. on Thursday, June 30, 2022 at the Rairigh Funeral Home, Ltd. in Hillsdale, PA, where a 6:00 p.m. funeral service will be held immediately following the visitation. Pastor Micah McMillen will officiate.

In lieu of flowers, memorial contributions in honor of Fred may be forwarded to the Rairigh Funeral Home, Ltd., P. O. Box 137, Hillsdale, PA 15746 to assist with funeral expenses.