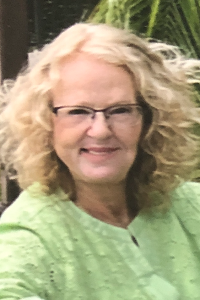 Born on September 9, 1959, in Ocilla, GA to the late Richard Chapman “Dick” Owens, Sr. and Martha Louise Fuller Owens, she was preceded in death by her younger brother, James Andrew “Jim” Owens, Sr.

Gary attended Irwin County public schools and graduated from Irwin County High School in the Class of 1977. She attended the University of Florida and graduated from Stephens College in Columbia, Missouri, her mother’s alma mater, with a BS in Education, and was awarded a Masters in Education from the University of Georgia. A lifelong educator, Gary taught school in several Florida communities, including Crystal River and Hollywood.

Following a stroke in 2008, Gary returned to live in the Tifton area. She was a lifelong member of the Ocilla United Methodist Church but was currently attending the First United Methodist Church of Tifton and was a faithful member of the Asbury Sunday School class.
Gary participated in many charitable activities, including Meals on Wheels. Despite her disability, she lived a rich life, kept a positive outlook, and never, ever complained.

Funeral services will be held 11:00 A.M., Saturday, June 25, at Ocilla United Methodist Church, with the Reverend Jay Roberson officiating. The eulogy will be delivered by Jane Tankersley Willis. The family will receive friends prior to the service from 10:00 to 11:00 AM at the Ocilla Methodist Church in the sanctuary.

The family wishes to thank all former caregivers for their loving kindness and attentive care and most especially her current ones, Wendy Morales and Leslie Thomas for their compassion and friendship to Gary.