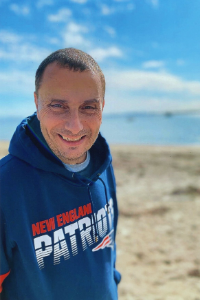 Eric Cook died of complications from Early Onset Alzheimer’s on Monday, June 20, 2022. He was 56 years old.
Eric was born in Beverly, MA in 1965, son of the late Alan P. Cook Jr., and the late Betty Ann Cook. He was the beloved husband of Danielle (Beaupre) Cook and the loving father of Michael Cook and Abigail Cook. He leaves behind his dearly loved in-laws Robert and Nancy Beaupre of Lynn, MA, brother- and sister-in-law Matthew and Breeanna Beaupre and their children Ava and Blake Beaupre of Lynn, MA. He is survived by his sister, Susan Adams of Charleston, SC and nephew, Nicholas Bennett of Beverly, MA as well as his sister Laurie Collins, her husband, Thomas Collins of Byfield, MA and their children, Christopher Collins and Benjamin Collins.
Eric was a kind-hearted man and devoted friend to anyone he met throughout his life, whether it was his buddies from the Prospect School, Beverly High School, baseball teams or youth groups at the First Baptist Church in Beverly. He continued to forge wonderful relationships throughout his career in restaurants, with many years at Sylvan Street Grille, and as a DJ and trivia host. Eric loved dogs, music, Stephen King books and the Boston Red Sox. He was a movie connoisseur, watching everything from action films to rom-coms — specifically Star Wars, the Godfather and Pee-Wee Herman. Film was a passion he passed on to his son, Michael, who has just graduated from Lesley University with a degree in Digital Film.


Danielle, Michael, and Abby were his heart and soul. He felt that they were life’s greatest gift to him, and they have been devoted to him throughout his long and challenging illness.

Relatives and friends are invited to his calling hours at the Levesque Funeral Home, 163 Lafayette St. [Route 114 / 1-A] Salem on Thursday, June 23, 2022 from 4:00 to 8:00 PM. His Funeral Service will be on Monday, June 27, 2022 at the First Baptist Church in Beverly, 221 Cabot St., Beverly, MA 01915 at 10:30 AM, followed by a Committal Service in St. Mary Cemetery, 226 North St., Salem. In lieu of flowers, kindly consider a memorial contribution to the Alzheimer’s Association. For guest book and to send a message of support to his family, please visit www.LevesqueFunerals.com.