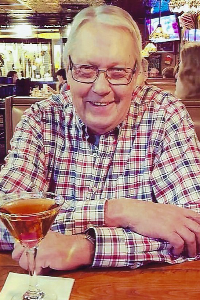 Alan C. Urbon of Ashland passed away June 19th. Born and raised in Roslindale he graduated from Roslindale High and Northeastern University with a degree in Computer Science. He then went on to be an IT Analyst for Intel & then Mintz Levin for many years. He moved to Ashland after having two daughters (Kerre & Ali) and when they were younger he attended every dance recital, basketball game, soccer game, chorus concert, school play, you name it he was there! To this day, he loves to tell them the ultimate dad jokes and loves to use sarcasm whenever he can.
Al always demonstrated an amazing work ethic. Not only is he very tech savvy, but he is the ultimate handyman. Even after retiring he worked part time at PineCrest Golf Club in Holliston (probably because he knew he could golf for free). He loved to do yard work and would brag to the neighbors about having the best looking yard on the street (which he did). He took pride in everything he did.
After he retired he lived a very simple life. He became a Grampy 2 ½ years ago when his first grandson Andrew was born and is expecting another grandchild in November. He enjoyed watching golf, basketball, football, and baseball, and you could always count on him for being up to date with all Boston Sports teams. He loves soaking up the sun whenever he gets a chance and will then brag that he has a better tan than you. He was loved so much by his family and friends.
Beloved father of Kerre and Ali Urbon both of Canton. Grandfather of Andrew McKnight of Canton. Brother of Shirley Mariani and her husband Bob of FL and Linda Urbon of W. Roxbury. Uncle of Cara Mariani of N.C. Also survived by his former wife Robin Urbon (Landrigan) of Canton. Visiting hours at the Dockray & Thomas Funeral Home 455 Washington St. Canton Thursday 4:00 to 7:00 pm. Funeral Mass at St. Oscar Romero Parish (formerly St. John the Evangelist) Friday at 12:00 noon. Burial private. For complete obituary and guestbook see www.dockrayandthomasfuneralhome.com