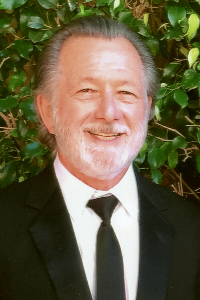 Don was born on December 14, 1941, to John Francis Edwards and Yvonne Ruth Mahoney in Youngstown, Ohio.

Don was employed by the City of Ventura for over 35 years. He started off as a mechanic working on SCAT buses and climbed his way up the ladder to the position of Equipment Services Superintendent. On August 1, 2000, at the young age of 58, he retired.

Don met his happily ever after, Barby Jo, (or “BJ” as he liked to call her) in 1975 and they married in 1977. They purchased the family home in Ventura where Barby still resides today and together they raised 7 wild and crazy children under one very structured and organized roof…with one bathroom.

He was the most organized man you’ll ever meet and a perfectionist at everything he did whether it be his profession or any of his many hobbies such as cycling, jogging, long walks, gardening, traveling, visiting the mountains or sitting in the creek at their Northern California property. He practiced healthy living and daily exercising. Family meant more to him than anything else in the world and he was unendingly proud of everyone in it. He made sure that each child or grandchild had every opportunity available to them and never, ever judged if anyone stumbled. A loving husband, parent and grandparent who often showed his love by gift-giving. He was a “MacGyver” of sorts and could fix most anything. He was a stickler for manners, proper etiquette, education and the biggest lesson he taught was to never, ever give up.

He did have a serious side although that’s not the side any of us preferred. He was adventurous, creative, devoted, loving, stern, trustworthy, goofy, honest, funny, giving and loyal. The man loved a roaring bonfire and really enjoyed it when it was surrounded by family and friends. His kooky sense of humor was like no other. You could walk through the house and come across faces he’d drawn with a marker on anything from fruit to rocks or toilet paper to make it come alive and have it placed in the most inconspicuous locations like it was normal. Although he had a few real live pets through the years his favorite seemed to be one he named “Boney Maroney”…a fake skeleton cat with red eyes he dressed with a human hair toupee, a chunky costume jewelry necklace and sat by his desk in his office. Obviously his home office was no longer a serious place of business. He was the life of every party and the best host whether the party was at his house or yours. He had dance moves like the best of them and an eclectic taste in music. He loved everything that had a good beat with his most favorite song being “Fire”.

Don was the most loving and supportive father a family could ask for and the friend you could always count on…a legend in his own right. In Heaven or on Earth we all know he forever “has our back” and we will be his “backup’. He fought hard trying to never give up but in the end God won this time. We will miss you always and love you forever.