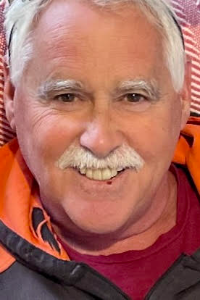 Limington - Stephen Alfred Croteau, age 69, died unexpectedly Sunday June 5 at his home in Limington. Steve was born November 12, 1952 in Biddeford, Maine. He was the son of the late Lionel “Friday” Croteau and Madeleine Peloquin Croteau.

Steve attended parochial school in Biddeford and was a member of the last graduating class at St. Louis High School in 1970. He went on to attend the University of Maine in Farmington, where he met Claudette Ouellette who he married in 1973.

He worked as a route salesman for J.J. Nissen. He later became branch manager in Fryberg and Portland. He retired in 2012. Steve was not one to sit still long, so in retirement he took a part time job as a distribution technician at Mercy Hospital in Portland.

Steve was reliable, well loved by family and friends, and a mentor to many. He was a man of integrity with an uncompromising work ethic. He lived for his family, providing steadfast support for his parents, siblings, children, nieces, nephews, and community. He enjoyed time spent with loved ones, both at family homes and at Biddeford’s beaches. After raising their children in Saco, they moved to Limington where they spent the last 22 years living their best life.

In addition to his love of family, Steve enjoyed coaching baseball and football when his children were in school. In 1988, Steve proudly coached the Maremont Little League Team to a state championship in which his son Keith played. He supported his daughter Michelle in her passion for running which included several marathons. More recently, he took joy watching his grandsons, Tyler, Ben and Alex in their sporting activities.

Steve never met a rocking chair he didn’t like, wearing out many rockers and floors over the years. He was an avid golfer who enjoyed playing with his long time golf friends. He frequently visited his “Good Bud” Steve Cavallaro and his family in Venice, Florida where many great memories and laughs were had together.

He is survived by his wife of 48 years, Claudette, their son Keith and his wife Megan and their two sons Tyler and Alex, daughter Michelle and husband David and their son Benjamin, and mother Madeleine; his older sister Patricia and brother-in-law Bern Binette; younger sister Diane and brother-in-law Peter Bouthillette and several nieces and nephews. He was predeceased by his father Lionel.

For those who wish to honor Steve, the family will be holding a gathering from 4 to 6 p.m. on Saturday, June 25, at the Chad E. Poitras Funeral Home, 498 Long Plains Road, Buxton. Online condolences may be expressed at the funeral home website: www.mainefuneral.com

In lieu of flowers, please consider a donation in Steve’s name to the Tunnels to Towers Foundation at www.t2t.org.