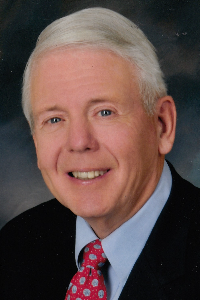 Richard F. "Rich" Young passed away peacefully on Sunday, the fifth of June, with his family by his side.

He was born November 11, 1939, in Mountain Grove, Missouri, to Sarah "Edna" Grisham Young and John Candler "JC" Young. He loved growing up in Mountain Grove with his younger brother, Lee Candler Young, and his late sister, Janet Young Miranda. The Grisham and Young families have deep ties to the community.

Rich attended the Rochefort America High School in France where his leadership ability emerged at an early age. He was elected Class President then served as High School President. He returned from France to attend Washington University in St. Louis, Missouri, before graduating from Missouri State University with a BA in economics. He was in the ROTC program and was President of the Sigma Phi Epsilon fraternity. Rich remained a very loyal MSU alumni serving in many positions including chairing the Foundation Board of Trustees. He was a recipient of the Outstanding Alumni Award in 2005.

Rich served in the Army where he rose from 2nd Lieutenant to Captain in his beloved First Infantry Division, "The Big Red One", including service in Europe as part of an operation to reinforce the Berlin Brigade. While in the Army, he was awarded the Army Commendation Medal with Oak Leaf Cluster.

Rich received his Masters in Economics from the University of Kansas before starting his business career at the Federal Reserve Bank in Kansas City, Missouri. He moved to Boston in 1968 to work for the New England Mutual Life Insurance Company. He was a member and served as President of the Boston Economic Club. In 1970, Rich joined Massachusetts Financial Services (MFS) where he worked for 21 years and rose to Senior Vice President and Senior Equity Portfolio Manager. While raising his family in Concord, Massachusetts, he spent his time coaching his kids' soccer teams, serving the town as a Trustee of Emerson Hospital, and as a Member and Chairman of the Trustees of Town Donations Board.

In 1992, Rich moved to New York City to join Bessemer Trust Company as Executive Vice President and Chief Investment Officer. He was recruited back to Boston in 1995 to join Welch & Forbes LLC where he was quickly elevated to President and Chief Investment Officer. He guided Welch & Forbes LLC for 16 years during which time the assets under management increased substantially. He was completely invested in his clients both professionally and personally. He retired from the firm in 2011.

In 2005, Rich married Doris Burke, with whom he spent the rest of his life. They divided their time between Marion, Massachusetts, and Vero Beach, Florida, with their two collies, Levi and Lucy. They enjoyed a large collection of friends, golfing at The Kittanset Club and John's Island Club, and traveling together.

Rich is survived by his wife, Doris, his son, Candler (Kim), his daughters, Katie (Kevin) and Amy (Walter), all his wonderful grandchildren, Kelsey and Ryan, Eliza, J.C. and Ashley Mae, Will and Emily, his brother, Lee Young, and the ever-supportive extended Burke Family.
Rich will be fondly remembered by all those whose lives he touched for his incredible leadership, humility, and positivity. He will be dearly missed. A Celebration of Life will be held at a later date to be announced this summer.