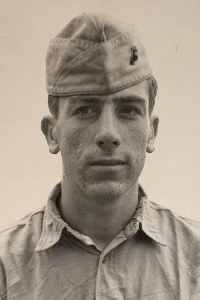 Richard Edward Fitzpatrick, Sr., age 95, of Medford passed away on Monday, June 6th. Born and raised in Chelsea, he was the son of the late Robert and Ann (Laughlin) Fitzpatrick. Richard proudly served in the Marine Corps during World War II and again during the Korean War, completing his service in 1958 as a First Lieutenant. After returning to civilian life, Richard was employed for many years as a meat cutter and deli manager.

A funeral will be held from the Dello Russo Funeral Home, 306 Main St., Medford on Monday, June 13th at 9 AM followed by a funeral mass celebrated in St. Joseph Church, 118 High St., Medford, at 10 AM. Relatives and friends are respectfully invited to attend. Visiting hours will be held on Sunday, June 12th from 4 through 8 PM. Services will conclude with burial at Oak Grove Cemetery, Medford.