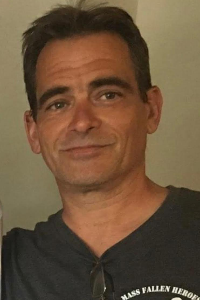 Mr. James M. Dunne, a resident of Arlington, passed away after a lengthy illness at the Brigham & Women’s Hospital in Boston on Sunday morning, May 29, 2022. He was 54 years old.

Born in Stoughton, Massachusetts, on September 13, 1967, he was the beloved son of John B. Dunne of Medford and the late Joyce (Kennedy) Dunne.

Mr. Dunne was a graduate of Medford High School, class of 1985 and was employed as a Carpenter who constructed sets for Disney and went on to own his own building company. In his youth, Jim was a member of the Navy Cadets. His dedication to this organization earned him the opportunity to travel out to sea with the Navy which he joined immediately after graduating from high school. He spent 6 years in the Navy, much of it out to sea in the control room as an air traffic controller on the air craft carrier the SS Constellation.

In his spare time, Jim enjoyed routing for the local Boston sports teams, especially the Red Sox and Patriots. Above all, Jim was a loving father, son and brother. He will be dearly missed.

Besides his father, John, Jim is survived by his loving children; Amanda Dunne of Reading, California and James Dunne, Jr. of Arlington, siblings; Catherine Himmel of Londonderry, New Hampshire and John and his wife Anne Marie Dunne of Newton, grandchildren; Harley Joy Thomas and Rhys Terrance-Wayne Thomas and nieces; Dawn M. and her husband Thomas Gilbert of Kingston, New Hampshire and Evelyn Dunne of Newton. Jim was also the father of the late Samantha Dunne and brother-in-law of the late Keith W. Himmel.

His funeral will be held from the Beals-Geake-Magliozzi Funeral Home, 29 Governors Avenue, Medford on Friday, June 3, 2022, at 10:30 AM, followed by a Mass of Christian burial celebrated in St. Francis of Assisi Church, 441 Fellsway West, Medford at 11:30 AM. Relatives and friends are most welcome to attend. Interment with Military Honors will be held on Monday, June 6, 2022, at 10:45 AM in the VA National Cemetery, Bourne, Massachusetts. Donations in Jim’s memory may be made to the VA Medical Center, 150 South Huntington Avenue, Boston, MA 02130 or to St. Jude Children’s Research Hospital, 262 Danny Thomas Place, Memphis TN 38105. For additional information, please visit, www.magliozzifuneralhome.com.