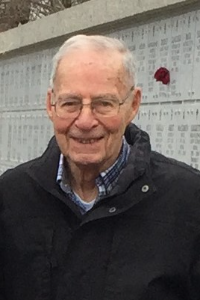 William F. Mills, age 92, of Hanover passed away peacefully on Wednesday, May 18, 2022. Bill was raised in Roslindale and graduated in 1947 from our Lady of Perpetual Help Mission High School in Mission Hill. He proudly served his country in the Air Force during the Korean War. He then spent his entire career as a lineman for New England Telephone & Telegraph (now Verizon), until his retirement in 1994.

Bill married his beloved wife, Jean, in 1958 and they started a family in West Roxbury before eventually settling with their four children on the South Shore.

Bill was predeceased by his wife Jean Mills (Rust). He is survived by his loving children William P. Mills of Hanson, Lisa Adams and her late husband John of Hingham, Susan Argiro and her husband Frank of Weymouth, and Alison Cloutier and her husband Lee of Madbury, New Hampshire; his cherished grandchildren Amanda and Nicholas, and many loving nieces, nephews, and grand-nieces and nephews. Bill was also the loving brother of the late Joseph Mills, Raymond Mills, Margaret Anastasi, and John Mills.

Bill was a gentle man who made so many friends in his life. He fully enjoyed his retirement, and his greatest joy was spending time with his friends and family.

Relatives and friends are invited to visiting hours for Bill on Tuesday, May 24, 2022 from 4:00 - 5:30 p.m. in the C. C. Shepherd Funeral Home located at 134 Pleasant Street (Columbian Square) in Weymouth, MA. A funeral service will be held immediately following the visitation at 5:30 p.m. in the funeral home. Burial will be at a later date in Bourne National Cemetery. Anyone wishing to honor Bill’s memory can make a donation to the Veteran’s organization of their choice, or to CarePacks Inc., P.O. Box 536, S. Weymouth, MA, USA 02190 which is an organization that collects and distributes Care Packages to active military personnel.