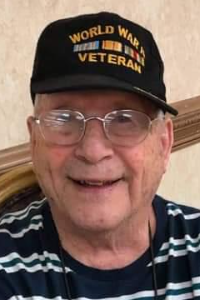 JOHNSTOWN, NY… Armand G. Goyette, 95 of Johnstown, NY, formerly of Gloversville, NY and Westport, MA, passed away May 18, 2022, at the Nathan Littauer Hospital in Gloversville, NY.
He was the loving husband of the late Cecile B. (St. Pierre) Goyette.
Born in Westport, he was a son of the late George A. and Irene (Beal) Goyette. He had lived most of his life in Westport.
Mr. Goyette was a World War II Navy Veteran who served as a quartermaster third class on the U.S.S. Bandera while serving his country.
Mr. Goyette had worked as the Chief Criminal Investigator for the Public Defender’s Office of Bristol County from February 1967 till his retirement on July 1991. He had graduated from Salve Regina University in Newport, RI with a bachelor’s degree in Criminal Justice.
Survivors include his son Armand R. Goyette and his wife Karen of Gloversville, NY; his grandchildren: Justin Goyette (wife Jennifer) and Zachary Goyette; his great grandchildren: Madison Goyette and Andrew Goyette; along with several nieces and nephews. He was the brother of Albert Goyette, the late Florence Johnson, Claire Duquette, Arthur Goyette, Roland Goyette, Oscar Goyette.
Funeral arrangements will be made at a later date to the convenience of the family.