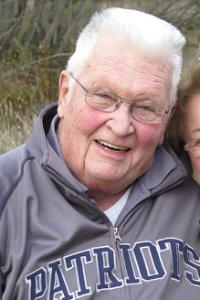 TEWKSBURY: Robert J. Connolly, age 83, a resident of Tewksbury for 53 years, formerly of Woburn, passed away at the Lowell General Hospital on Monday, May 16, 2022.

He was the beloved husband of 53 years to Susan E. (Baggs) Connolly.

Born in Woburn on March 15, 1939, he was the son of the late Michael Connolly and the late Helen (Flaherty) Connolly.

In 1969, he and his wife Susan moved to Tewksbury where they raised their three children.

Robert was employed for 53 years as a Mechanical Designer for M/A-COM Technology Company and Tyco International Company until his retirement in 2009.

He enjoyed bowling, golfing, traveling to Ireland and California, vacationing in Gloucester, and dining on seafood at Woodman’s of Essex. In addition, Robert loved sports. He treasured watching his children participate in their athletic endeavors as well as following local, college and professional New England sports teams.

In addition to his wife, he is survived by his three children, Joseph R. Connolly and his wife Jessica of Seabrook, NH, James M. Connolly and his wife Sarah of Corte Madera, CA and Jean Marie Robinson and her husband Jeffrey of Marshfield: five grandchildren, Millicent and Owen Connolly, Evan, Chloe and Edward Robinson.
He was the brother of Marie Connolly and the late Rev. Edward Connolly, Francis Connolly and John Connolly.
Robert leaves several nieces and nephews and numerous extended family members.

Calling hours are Wednesday, May 25, from 4-7 p.m. at the Farmer & Dee Funeral Home, 16 Lee St., Tewksbury. His funeral procession will begin on Thursday, May 26, at 9 a.m. at the funeral home followed by his Funeral Mass at 10 a.m. at St. William’s Church, 1351 Main St., Rte. 38, Tewksbury. Interment at Tewksbury Cemetery. In lieu of flowers, donations in his memory may be made to the Alzheimer’s Association, www.alz.org, 309 Waverly Oaks Road, Waltham, MA 02452