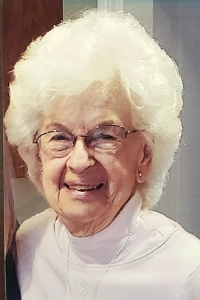 TEWKSBURY: Barbara L. (MacKay) Chandler, age 93, a resident of Tewksbury for 83 years, passed away at D’Youville Senior Care in Lowell on Tuesday, May 17, 2022

Born in Woburn on July 24, 1928, she was the daughter of the late Samuel MacKay and the late Edna (Whittle) MacKay.

Barbara was raised in Tewksbury and graduated from Tewksbury High School in 1946. During her high school years, she was captain of the Girls Basketball Team and captain of the football cheerleading squad.

Following her wedding, Barbara devoted her life to her family and raising her three children.

In her spare time, she enjoyed bowling at Wamesit Lanes, playing tennis at the former North Meadow Tennis Club, and golfing at the Billerica Country Club.

In addition, Barbara assisted for many years as a poll worker for the Tewksbury Town elections.

Barbara was a talented painter as well as an exceptional baker and cook.

Her family would like to thank the staff at Bayberry Assisted Living and the staff at D’Youville Senior Care for the exceptional care provided to Barbara.

Barbara was the sister of the late Richard and Donald MacKay.

Calling hours are Sunday, May 22, from 4-7 p.m. at the Farmer & Dee Funeral Home, 16 Lee St., Tewksbury. Her funeral will begin on Monday, May 23, at 10:30 a.m. at the funeral home, followed by her Funeral Mass at 11:30 a.m. at St. William’s Church, 1351 Main St., Rte. 38, Tewksbury. Interment at Tewksbury Cemetery. In lieu of flowers, donations in her memory may be made to American Heart Association at www.heart.org or to the Alzheimer’s Association at www.alz.org