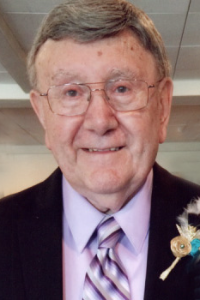 
Edward A. Rapoza, age 92 of West Bridgewater, died May 13, 2022 at Lifecare Center in West Bridgewater. He was the devoted husband of Marlene V. (Carriuolo) Rapoza for 67 years.

Ed was born, raised and educated in Taunton, a son of the late Frank and Arithmezia (Amaral) Rapoza. During the Korean War he served in the US Air Force stationed in Texas. For many years, Ed was a salesman in several local auto dealerships.

Edward was the father of Steven Rapoza of St. Petersburg, FL; Michael Rapoza and his wife Sukalaya of Bridgewater; Denise Osborne and her husband Martin of St. Petersburg, FL; Scott Rapoza and his companion Donna Lynne of Brockton and the late David Rapoza. He leaves four grandchildren: Aimee, Julie, Ryan and Natalie and five great grandchildren: Cassidy, Kinsley, Margot, Max and Rory. He was the brother-in-law of John Carriuolo, Jr. and his wife Carol of E. Bridgewater.

Edward’s family would like to thank the staff of Lifecare Center for their compassionate and loving care of their husband and father. Rather than sending flowers, they ask that you make a donation to St. Jude’s Children Hospital, PO Box 1000, Dept. 142 Memphis, TN 38148 or to the charity of your choice
Visiting hours will be held in the Conley Funeral Home, 138 Belmont St. (rte. 123) Brockton on Thursday, May 19, 2022 from 5-8pm. The procession will gather at the funeral home on Friday at 10:30am for a Funeral Mass at St. Ann Church, West Bridgewater at 11:30am Burial with military honors in Pine Hill Cemetery.