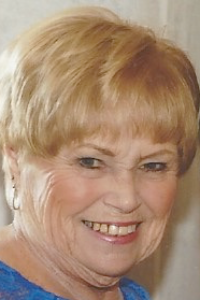 Barbara A. (Morse) Morrison, age 77, of Mansfield, passed away unexpectedly, while enjoying a beautiful sunny day at home, on Thursday, May 12, 2022. She was the beloved wife of the late Neil “David” Morrison, Sr., to whom she was wed for fifty-one years at the time of his death on July 30, 2015.

Born in Boston, MA on January 27, 1945, she was a loving daughter of the late Charles and Elizabet (Garvey) Morse.

Barbara grew up in the Dorchester neighborhood of Boston and was a graduate of Dorchester High School. She had made her home in Mansfield for the past fifty-three years.

A dedicated home to her adoring family, she had also worked at Robert Allen Fabrics in Mansfield. She was a communicant of Saint Mary’s Church in Mansfield and her greatest gift in life was spending time with family. Her hobbies included quilting, needlepoint, puttering around her yard and playing card games. At the time oh her death, Barbara was anticipating the wedding of her grandson Neil in June.

She is survived by her devoted children: Deborah A. Morrison and her partner Robert Barry of Mansfield, Neil David Morrison, Jr. and his wife Jennifer of North Attleboro and Traci A. Colangelo of Michigan. She was the cherished grandmother of Cristie Anna Schiffman and her husband Joseph, Neil David Morrison, III and his fiancé Katie Barstow, Dominic J. Colangelo, Nicholas A. Morrison and the treasured great grandmother of Hunter Joseph Schiffman. She was the dear sister of Dorothy O’Leary, Grace McGrath, Ruth Reale, and the late Margaret McGillvray, Charles Morse, RoseMary Roche, Patricia Hock and is also survived by her loving nieces and nephews.

Relatives and friends are cordially invited to attend visiting hours on Thursday, May 19th from 4:00-7:00 P.M. at the Sherman & Jackson Funeral Home, 55 North Main Street, Mansfield.

A funeral service will be held at the conclusion of visiting hours on Thursday evening at 7:00 P.M. at the Sherman & Jackson Funeral Home. Burial will be held privately at a later date at Saint Mary’s Cemetery in Mansfield,

In lieu of flowers, Barbara’s family would prefer that donations in her memory be made to St. Jude Children’s Research Hospital, 262 Danny Thomas Place, Memphis, TN 38105.