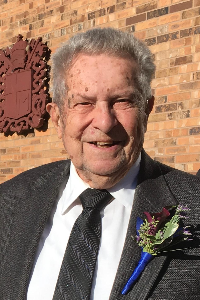 STOUGHTON—Paul E. Leclaire, age 92 of Stoughton, formerly of Oxford, passed from this life following a period of failing health on Thursday, May 12, 2022.
Born in Worcester, he was the son of Ernest F. Leclaire, DDS, and Pauline Aschenbach. He was raised in Oxford, MA and was a 1947 graduate of Oxford High School where he had been a baseball pitcher. After attending Worcester Academy and Georgetown University, he joined the Air Force, and succeeded in earning his instrument flight certification. Following his honorable discharge as a 2nd Lieutenant, he graduated from Boston College in 1956 with a BA in Business Administration.

He was employed by Sears Roebuck and Co. from 1956 – 1969, living in CT and Upstate N.Y. before returning to MA. He then obtained his teaching certificate from Bridgewater State College, becoming an Electricity and Electronics teacher at Stoughton High School. He retired from the Stoughton Public Schools as a Supervisor of Educational Services in 1991.
He has been an active member of every parish he has been associated with, first as an altar boy in his home town, then as an usher and CCD teacher, and, then as a lector and Eucharistic Minister, and member of the Canton Catholic Men’s Club.
He has served his town on many platforms wherever he has lived, on political campaigns, and also as a town meeting representative for many years. Paul was a founding member of the Stoughton Association for Exceptional Citizens (SAEC), holding executive positions on the board. Paul taught adult night school classes in small engine repair, and eventually became the director of the night school programs at Stoughton High School.
Paul was an excellent golfer and loved playing rounds with his friend John every Wednesday, followed by pizza and a beer at Town Spa, until the snow was too deep to find the balls.
He and Paula had many wonderful adventures with their large group of fun-loving friends, especially trips to Christos, the Cape, and Chauncy Creek. They also enjoyed traveling, especially to Bermuda. In addition, Paul loved to sail on Webster Lake where he won many trophies and the heart of the love of his life, Paula. They enjoyed 51 wonderful years together.
Many happy times were spent in the company of his father and other male relatives and friends, and his dog, Dina, hunting and fishing, which provided many delicious family meals.
He was very handy, and enjoyed many things, among them, woodworking and creating everything from baby rattles, toys, and play structures, to adding on an addition to the back of his home.
He was blessed with a green thumb and shared the joy of gardening with his family, providing abundant fruits and vegetables, which he also canned, pickled, and made into jam and wine.
He loved to cook, and was a master with fish and anything on the grill. He would bake a cake every week, and even if he might not have been especially eager to eat the main meal, always found room for dessert.
He was a loving and devoted father who taught by example, making it clear from an early age that the world wasn’t going to be handed to us on a silver platter, that many hands make light work, you are known by the company you keep, and a job worth doing is worth doing well.
He was predeceased by his wife, Paula (O’Brien) and his parents. He leaves his children: Kimberley Leclaire of Naugatuck, CT, Pamela Connors of Stoughton, Kristina Leclaire of Concord, Patricia Martin of Stoughton, Karolyn and husband Richard Tontarski of Alexandria, VA, Stephen Leclaire of Stoughton, and Scott and wife Laura (Brothers) Leclaire of Reading, 8 grandchildren: Kathleen Murray (Tim), Lisa C. Gagnon (Peter), Capt. Ashley Connors, MD, Brendan Connors (Ericalynn), William Martin IV, Andrew (Sarah) Martin, Christopher and Sara Leclaire, and 6 great-grandchildren. He is also survived by his sisters: Christine McKay of Webster and Patricia Mitchell of Wellesley, and many cousins, nieces, and nephews. He was predeceased by his twin, Mary.