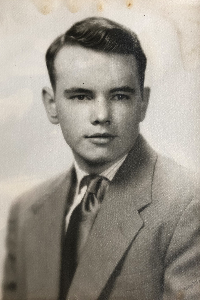 Terrence Joseph Brown, husband of the late Marcia Jean (Uebbing) Brown, passed away at Beth Israel Hospital in Boston on Monday morning, April 25, 2022, due to complications from a fall he suffered at his North Andover home three weeks prior. He was 85 years old.

Born in Omaha during the record heat wave of 1936, he was the first child of Joseph and Lizetta (McNeill) Brown. Terry graduated from the parochial schools of St. Cecilia Cathedral and worked his way up in the slaughter houses for which Omaha is known. He lugged sides of beef on the day he received his master’s degree in mathematics. He finished at the University of Kansas with a doctorate and began a career in teaching and research. In Chicago he met Marcia, a math student. They were married on August 26, 1967. While he was teaching in Kansas City at the University of Missouri, Marcia gave birth to a daughter; in Oswego at the State University of New York, a son and a second daughter.

At home, Terry was known to do a decent Donald Duck impression. He caused lots of giggles with “let’s jump on Dad’s tummy”. At dinnertime, he would often play a game where he would place his hand down on the table and slowly draw it away. His children would attempt to touch it before it disappeared. He somehow always knew the right number of times to let a child win before ending the game.

After teaching at the University of Illinois in Urbana-Champaign, Terry transitioned to computer science at CERL with the Army Corps of Engineers while Marcia finished her second master’s degree, in computer science. The two found jobs in the greater-Boston software industry and settled their family in North Andover. Terry worked for many years at Computervision Corp as a mathematician in the area of computer-aided design and manufacturing. He developed essential algorithms and software routinely used today in industry applications. Sadly, it was during this time that Marcia was diagnosed with multiple sclerosis. Terry, with help from his children, remained her care giver over the course of a 28-year decline that ended with her passing in 2012.

As widower and retiree, Terry enjoyed his time collecting books (and reading most or at least parts of them), watching quality television (C-SPAN, PBS, TCM, as well as football: Notre Dame and the Patriots), taking walks (and naps), talking with his grandchildren, and, finally, pursuing his lifelong passion for pure math, specifically the theory of matroids. In his final years he maintained practice of his Catholic faith and remained active in the management of the family farm, which grew from a homestead claimed by his grandfather William McNeill in 1885 near the then to be established town of Hazard, Nebraska.

Terrence is survived by his daughter Lizetta and her husband James Fennessy of North Andover, his son Michael, and his daughter Christine and her husband Brian Albert of Phoenix; by his sister Sharon Alan of Simi Valley; by his niece Michelle Galanti and his nephews Craig, Todd and Thomas Alan; and by his grandchildren: Meghan, Erin, and Laura Fennessy; Casey, Gavin, and Liam Albert.

His funeral mass will be celebrated at St. Patrick Parish, 118 South Broadway, Lawrence on Wednesday, June 1 at 11 AM. Relatives and friends are welcome to attend. Calling hours will be held in the Burke-Magliozzi Funeral Home, 390 North Main Street, Andover on Tuesday, May 31 from 5 to 8 PM. Interment will be held in the Ridgewood Cemetery in North Andover. Donations are suggested to be made anonymously to the Cor Unum Meal Center. For additional information, please visit, www.burkemagliozzi.com.