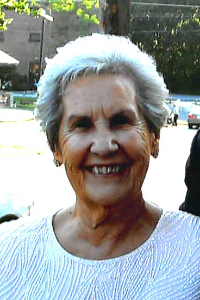 Helen L. ‘Tootsie’ (Bickford) Sousa, 91 of Tewksbury, passed away peacefully on Monday, May 9, 2022 at Blair House of Tewksbury. She was the widow of the late Henry Sousa who passed away in 1997.

She was born in Lowell on October 3, 1930 and was a daughter of the late Harold Bickford and the late Mary (Gomes) Bickford.

Tootsie was a communicant of Immaculate Conception Church in Lowell. She enjoyed traveling, especially to Las Vegas with her brother, Donald. Above all else, she enjoyed spending time with her family, especially her children. She took pride in raising her children and grandchildren, and was always ready to help friends and neighbors with children.

She is survived by her five children, Diane Trovato and her husband, Michael of Ave Maria, FL, David Sousa and his partner, Nancy Gilmartin of Wilmington, Donald Sousa and his wife, Frances of Dracut, Dodie Sousa Kane of Andover, and Dean Sousa and his wife, Nancy of Pelham, NH. She is also survived by eleven grandchildren, Elizabeth, Michael, Lindsay, Anthony, David, Luciana, Justin, Jessica, Ashley, Daniel, and Caitlin; seven great grandchildren, Max, Alexa, Ava, Henry, Harrison, Rylee, and Milo; and many nieces and nephews.

On Friday, May 13, 2022 all are welcome to attend her funeral mass at 10 a.m. at the Immaculate Conception Church, 144 East Merrimack Street, Lowell, MA, followed by burial at St. Mary Cemetery.

In lieu of flowers, donations in her memory may be made to the Immaculate Conception Church in Lowell.