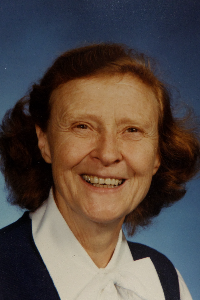 Mary was born on October 12, 1923, in Torryburn, Scotland, the daughter of John and Janet Meikle.

Mary was studying Library Science in Dunfirmline, Scotland, when World War II broke out. While serving as a Red Cross nurse in England during the war she met a young American aviator named Calvin Batchelder. They were married in Scotland on February 26, 1945. Mary emigrated to the US the following year, arriving on one of the first voyages of the re-commissioned ocean liner, Queen Mary, dedicated to bringing war brides to the US. Calvin and Mary settled in Alton, NH, Calvin’s hometown. They built a house which was their home for the rest on their lives. At the time of Calvin’s passing in December 2021, Mary and Calvin had been married nearly 77 years.

In addition to her parents and husband, Mary is predeceased by her brother, Walter Meikle. She’s survived by her four children; Carol, Bruce, Joan and Mark, eight grandchildren and thirteen great-grandchildren.

Mary was active in the community throughout her life, serving as a Civil Defense organizer, Girl Scout leader, school aide and library volunteer. She was an avid reader with a thirst for knowledge. Among her favorite hobbies were gardening, canning, sewing and braiding rugs.
She enjoyed outdoor activities, especially skating on Lake Winnipesaukee,

After the last of her four children started school, Mary began volunteering at the Alton Elementary School. Following completion of education classes at UNH, she was hired by the Alton school system to help develop their Enrichment program and to assist in cataloging the school library. She also worked at the Gilman Library in Alton for many years.

Upon their retirement, Calvin and Mary became avid hikers. Together, in 1992, they hiked the entire length of the Appalachian Trail. They climbed most of New Hampshire’s 4000 footers and made hiking trips to Scotland, Wales, England, and New Zealand.

A private joint service for Mary and Calvin will be held later this month.