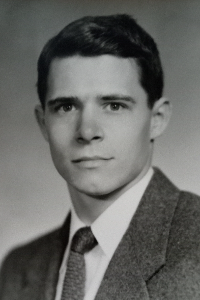 
James Powel Ingham passed away on February 24th of natural causes/basal cell carcinoma. He was born on August 7th, 1934. He was the middle child of Herbert and Mary Louise Ingham. He was the younger brother of Herbert Jr (passed) and younger sister Patricia Ingham. He leaves behind three children Eric S. Ingham, Laura Louise Ingham (Burkett) and Keith P. Ingham. He also has four nieces and one nephew, three grandchildren and four great-grandchildren. There were no funeral or memorial serves. His children plan to scatter his ashes in New Hampshire, to be in the wilderness that he loved.

He was born in Los Angeles, California. The family moved to Jamaica, Queens, NY when he was 4 years old. They moved to Roslyn Heights, NY when he was nine. He was very bright. But our aunt remembers him “being very mischievous, always getting into trouble.” She said he got in trouble for climbing out his bedroom window and sitting on the roof.

When he was attending Roslyn High School, he entered a science competition and won a four-year medical scholarship. He turned it down because he wanted to be an engineer. He from graduated Roslyn HS. He went on to attend Rensselaer Polytechnic Institute following his brother, Herb. He majored in mechanical engineering. He was picked on by some of the football players because he was smaller. Our aunt reports he challenged them to push-ups, and he won. They stopped picking on him. He joined a fraternity following his brother. He became the fraternity house chef. He really enjoyed cooking.

He enjoyed non-competitive sports. He joined a bicycle hostile across Europe. After returning, he enjoyed sailing, skiing, canoeing, camping, and ice skating. He graduated from RPI with a degree in mechanical engineering in 1955. He was married in 1956 and my brother, Eric was born in 1957 and I was born in 1959. He adored being a father.

After his divorce in 1961, he worked for his father’s company on Long Island. During our growing years, Jim continued to enjoy outdoor sports. During weekends with Eric and I, he enjoyed cooking for us. At our grandparent’s house he would read us Winnie The Pooh before bed. Eric was 5, I was 3. I remember he was laughing so hard, he was crying. Neither of us understood what was so funny. It was still a nice memory. At our grandparent’s house, on Mother’s Day morning, he said he would be right back. He ran out and got our Nana some flowers to surprise her. When I was 14, he also picked her up at the airport, after our grandfather died. It surprised her and she cried a little. She thought she’d have to go back there alone. He adored our Nana. He also exposed us to all kinds of activities: skiing in Vermont, sailing up to Nantucket from Long Island, canoeing and camping in the Adirondack Mountains, swimming at the Manhasset Bay Yacht Club. One time, when I was five, I remember curling up with him and watching fireworks while camping. A spark came near us, and he pulled me closer. While on the beach, I was nine. I floated out on a blow-up raft and got scared. He swam out without a second thought. He was so protective. He loved us. His niece and nephew remember him talking about all his adventures and playing football in the backyard.

He remarried in 1968 bringing Keith into our family. He continued to enjoy all the outdoor activities. Our family moved to Sudbury Massachusetts in 1976. We befriended a family down the street. To this day, we are still “friends” through Facebook.