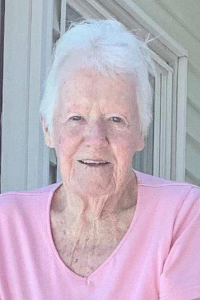 Carol A. (Dillon) Isabelle, 88, a longtime Tewksbury resident, passed away peacefully at her home on Tuesday, May 3, 2022 after complications from a fall. Carol was the widow of the late Ronald W. Isabelle who passed away in 1989.

Carol was born in Lowell, one of three children of the late Henry D. Dillon and the late Anna C. (Leary) Dillon. She was educated in Tewksbury and was a graduate of Tewksbury Memorial High School. After high school, she worked in Lowell at the Bon Marche before starting her family and raising her children. She was a communicant of St. William of York Church in Tewksbury and also volunteered in the Tewksbury State Hospital for a number of years.

Mrs. Isabelle enjoyed arts and crafts, especially ceramics and knitting. She also enjoyed playing cards and was one of the last surviving members of a group of friends known as “The Golden Girls”. She was also a well spoken and eloquent conversationalist and her ability to tell a story will be greatly missed.

She was also predeceased by her brother and her sister, the late Henry Dillon and the late Anne (Dillon) Roux.

HER FUNERAL WILL BEGIN ON WEDNESDAY MORNING AT 9 A.M. AT THE FUNERAL HOME, FOLLOWED BY HER FUNERAL MASS AT 10 A.M. AT ST. WILLIAM’S CHURCH, 1351 MAIN STREET, TEWKSBURY MA. BURIAL WILL FOLLOW AT TEWKSBURY CEMETERY.