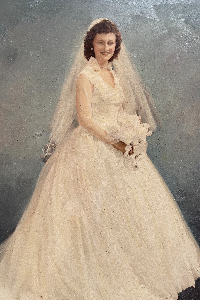 Patricia Ann Collins (Higgins), age 86, of Andover, passed away peacefully on May 4, 2022. Patricia was born in Cambridge, MA; she was the daughter of the late Sarah (Hubacheck) and former Cambridge Police Sargent, John P. Higgins. She was sister to Carolyn Quinn of Lexington, MA, the late John Higgins of Phoenix, AZ, and Barbara Higgins of Atlanta, GA.

Patricia's active mind and diverse talents were well fostered in the intellectual community of Cambridge, where she received a rigorous Catholic education. Her ability to do so many things well would characterize her throughout her life, and years later Patricia would chronicle the fond memories and experiences that shaped her, as an author for the magazine, Growing Up in North Cambridge.

Patricia met her husband John ("Jack") Collins during their high school years. They married in 1956, after Jack returned from military duty.

The couple moved to Wilmington, MA in the early 1960's, where John built their first home, and where they began their family. By the early 1970's, they relocated to Andover, MA. This time Patricia designed and contracted their home, where Patricia lived until her passing, 50 years later. Jack died in 1992.

Patricia was a devoted wife, mother, homemaker and exceptional cook. She worked over the years as a telephone operator, and as a volunteer at the Andover library. A great source of pride was her business, where she taught ceramic classes.

Patricia and her husband enjoyed their later years alternating between Andover, and their condominium in Sarasota, FL. They also traveled domestically and abroad.

Patricia was mother to Barbara Collins & her husband Michael RigordaEva of Kensington NH, Nancy (Collins) Mullen of Newburyport, MA, & John Collins and his wife Lori of Laguna Niguel, CA. Her grandchildren include Julia RigordaEva of Fairfield, CT, Jessica RigordaEva, of Newmarket, NH, Corinne RigordaEva of Denver, CO, Kyle Mullen of West Newbury, MA. and Caitlin Collins and her fiancé, Kea Hartley of Atlanta, GA. In addition to family, Patricia also leaves good friends, her children's significant others and many nieces and nephews.

Family and friends will gather on July 16th 2022 for a celebration of life service at 11:00 a.m. at the West Parish Chapel in Andover, MA.

In lieu of flowers, donations in Patricia's memory may be made in her name to the American Heart Association.