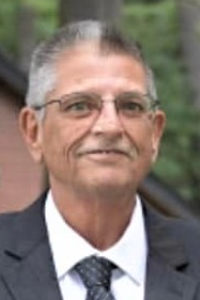 Vito was born and raised in Worcester. He leaves behind his loving wife and best friend of 39 years, Patricia Zenkus, his beloved daughter, Zoe Leclaire, wife of Joshua Leclaire of Ellington, CT., and his two grandchildren, Deja and Dio Leclaire who were the light of his life. He also leaves behind his sister-in-law, Peggy Zenkus of Worcester, many nieces, nephews, great-nieces and great-nephews whom he dearly loved. He was predeceased by his parents, Bertha (Gircys) Zenkus and Algird L. Zenkus, his brothers Algird A. Zenkus and Theodore M. Zenkus and his stepmother, Dorothy A. (Madura) Zenkus.

Vito graduated from Holy Name Catholic High School in 1976. He received two Associate Degrees from Quinsigamond Community College and a BSBA Degree from Nichols, College, Dudley. He previously worked at David Clark Co, Digital Equipment Corp, Intel Corp, and prior to retirement worked at several banking institutions as a Mortgage Loan Officer. Vito was a lifelong member and a past Sergeant at Arms of the Lithuanian Charitable Society – Maironis Park in Shrewsbury. He was a member of the Lithuanian Outing Association in Gardner and was a member of the Auburn Elks.

Vito loved spending time with his family and friends, working in his yard and feeding every bird who landed there. Being an avid fisherman, he was very rarely seen without his fishing poles. He had several fishing buddies he enjoyed spending time with throughout the years. Vito’s big personality, enthusiasm for life, love of his Lithuanian heritage and culture and his overall loving nature will be sorely missed by all of his family and many friends.