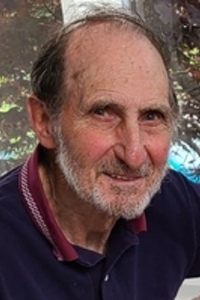 Rocky Anthony Taddeo, 88, formerly of Franklin, MA, passed away on April 13, 2022 from injuries sustained in an accident in Montville, ME where he currently resided.

Rocky was born in Franklin, MA on December 14, 1933, son of Frank and Antoinette (Nanni) Taddeo.

He was educated in the Franklin school system. He then attended Wentworth Institute’s plumbing program in Boston, MA. Rocky was employed for 40 years as a Journeyman Plumber at D.G. Ranieri & Sons of Franklin before starting a self-employed plumbing business.

He was a long-standing member and served as President of the Franklin Rod & Gun Club. He was also a member and past President of the Montville Rod & Gun Club. He spent much time in Maine over the years with family and friends, particularly hunting, fishing, and on his many projects. Rocky became a Registered Maine Master Guide in 1997, lending his expertise and joy for the outdoors to others he led.

Rocky first came to the Montville area in the 1960s for its natural beauty, being introduced to residents such as Wilbur Fuller and Walter Lamont, and their families. After purchasing land and building a few camps, he finally built a retirement home for he and his wife. He became the nucleus of a group of relatives and friends from Franklin who then over the years purchased properties and built homes in the Center Montville area, adding much character, energy and love to the neighborhood.

He is survived by his wife, Lucille (Daleszynski) Taddeo of Montville, ME; his daughter and son-in-law, Antoinette (Taddeo) and William Suarez of Boylston, MA, and their children Justin and Brittany; his son and daughter-in-law, Arthur and Carol-Anne (Morse) Taddeo of Pepperell, MA; his son Roger Taddeo of Franklin, MA and his children Danielle, Alexander, and Michaella; his son and daughter-in-law, Eric and Andrea (Clemeno) Taddeo and their children Jessica and Elizabeth, of Medford, MA; four great grandchildren, Carley, Vanessa, Remi, and Marcus Jr.; and his sisters Rosa (Taddeo) Robles of Norwood, MA and Carol (Taddeo) Dickson of Northbridge, MA; and his brothers Ronald, Alfio, and Edward, all of Franklin, MA. Also, with loving memory of the predeceased siblings; Michelena, Olympia, Dorothy, Annette, Francis, Americo and Christopher.

Relatives and friends are invited to attend his calling hours in the Charles F. Oteri and Son Franklin Funeral Home 33 Cottage St. Friday May 20th, from 5-7PM.

A memorial service will be held on May 21, 2022 at 10 AM at St. Mary’s Church in Franklin, MA to view the service stmarysfranklin.org with a reception to follow. The family would like to thank the community of Montville, ME and neighboring towns for their kindness and generosity to Rocky and his family.

In lieu of flowers, donations may be made to the American Cancer Society in support of those affected.