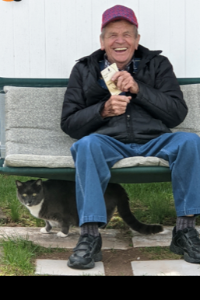 He leaves two sons, Daniel Lazarowski and his wife Ann Hutchinson of Newington, and Paul Lazarowski and his wife Michele Gordon of Chesapeake, VA; three sisters, Theresa Jezierski and Anna Scanlon, both of Thompson, and Genevieve Lariviere of Webster, MA; one brother, Stanislaw “Stan” Lazarowski, Jr. and his wife Susan of Mountain Home, ID; four grandchildren, Kayla and Alexa Lazarowski, both of Newington, Nicole Lazarowski of Jacksonville, FL, and Sean Lazarowski of Oakwood, GA; two great-grandchildren, Madison and John, both of Oakwood, GA; and several nieces and nephews. He was preceded in death by two sisters, Helen Baron and Stasia Nalepa, and by a brother, Joseph Lazarowski.

He was born in Dudley, MA on June 22, 1936, a son of Stanislaw Lazarowski, Sr. and Kazimiera (Kozlowski) Lazarowski. He graduated from Bartlett High School in 1954. He had lived in East Hartford since his marriage.

Mr. Lazarowski was an Air Force veteran of the Korean War serving four years as an Airman 1st Class.

He was an engine test stand operator at Pratt & Whitney Aircraft’s Willgoos Laboratory in East Hartford for over forty years retiring in 2000.

He was a devout Catholic and attended Blessed Sacrament Church in East Hartford, and Saint Paul’s Church in Glastonbury.