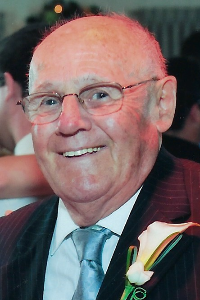 Libero W. “Lee” Zanotti of Canton passed away April 22nd. Born in Santarcangelo, Italy he immigrated to the United States at age 10. He was raised in Roxbury, graduated from Roxbury Memorial High School and served in the United States Air Force during WW II. He worked as a Salesman for Sears Roebuck for 43 years before retiring. Lee was an avid golfer and a member of Wampatuck Golf Club. He also enjoyed bowling, playing cards and spending time with his grandchildren.
Beloved husband of the late Pauline R. (Tosi). Father of Maureen D. Cameron and her husband Bob of Canton, Nancy Lee Mann and her husband Rick of Mashpee, and Stephen W. Zanotti and his wife Ginny of Winchester. Brother of the late Lea Marenghi. Also survived by 2 grandchildren and 2 great grandchildren. Funeral Mass at St. Oscar Romero Parish 700 Washington St. Canton Friday morning at 10:00 am Visiting hour at the Dockray & Thomas Funeral Home 455 Washington St. Canton Friday morning prior to the mass from 8:30 to 9:30 am. Burial Knollwood Memorial Park, Canton. In lieu of flowers, donations may be made in his memory to the Wounded Warrior Project at www.woundedwarriorproject.org or to the MSPCA at www.mspca.org.