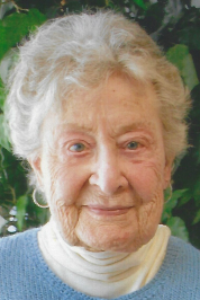 WORCESTER: Virginia “Ginny” L. (Tuebner) Johnson, of Worcester and formerly of Princeton, MA died peacefully on Friday, April 8, 2022, at UMass Memorial Medical Center with her daughter by her side after a period of declining health.

She leaves behind a daughter, Leslie Johnson and her husband John Tobiason of Amherst, MA, a son, Robert F Johnson Jr. of Great Falls, Montana, grandsons Anders Tobiason (Hayley) and Erik Tobiason, and great grandchildren Soren and Greta. She also leaves several relatives including her dearest cousin, Elaine Koch of Florida, and her niece Donna Dughi and her family.

Ginny was born in Jamaica, NY on May 28, 1929, to the late Mildred (Savage) and Robert Tuebner. She grew up in St. Albans, NY, graduating from Andrew Jackson High School. She met her future husband, Bob, on a Cape Cod beach in the late 1940’s and they were married in 1950. They lived together in St Albans until 1955 at which time they moved to Worcester, MA (where Bob was from). Together they renovated a house on Rosemont Rd in Worcester where they lived for over 20 years. In the early 1980’s they built the “house of their dreams”, a log home in Princeton MA where they lived for almost 30 years. In 2009 they returned to Worcester to live at Briarwood where Ginny continued to care for Bob as his Alzheimer’s advanced.

In the 1960’s Ginny attended Quinsigamond Community College and obtained her LPN degree. She worked at Hahnemann Hospital for her entire career. After retirement, while she and Bob lived in Princeton, she volunteered for many town activities and projects. She was also a member of Zion Lutheran Church. Once she moved to Briarwood, she continued her volunteer activities.

Ginny loved being a “Grammy.” She and her grandsons, along with Grampy Bob, had many adventures together, including a number of memorable trips to Florida. She was so thrilled to become a great grandmother to Soren and Greta. Ginny and Bob loved hosting family get togethers and holiday celebrations, including the annual Easter Egg hunt in the woods in Princeton, delicious Thanksgiving meals, Christmas wreath making, and Swedish Christmas festivities. Their travels took them to Bermuda several times and many places in the USA and Europe. They also spent many years camping and volunteering at Camp Calumet in Freedom, NH.

Ginny was a dedicated sports fan, starting with the Brooklyn Dodgers and continuing with the Boston Red Sox, New England Patriots, and Boston Bruins. One could always find a couple of dogs and a cat at her home. She loved her four-legged friends and in her later years you could always find her dear cat companion, Ebony, on her lap. She also loved to garden and knit. At Briarwood, she was an active member of the Knit Wits.

She was predeceased by her husband Bob (2012) after 62 years of marriage, her brother Bob and her sister-in-law Helen, niece Robyn, nephew Glenn, and many dear friends.

Her family would like to extend heartfelt gratitude to Maggie, Grace, and Margaret who compassionately cared for Ginny this past year, to Paula whose friendship and care helped Ginny in so may ways during the past few years for which Ginny’s family will always be grateful, to Joyce, her homemaker, to Caitlin, Nancy and all of the nurses and staff at the VNA Care Network for their comprehensive care , to Mike and Kindred at home VNA for their daily visits earlier last year and to all the staff and residents at Briarwood who were so kind.

Ginny’s family would also like to thank the nurses, physicians, medical team, and all the staff on 3W at UMass Memorial Medical Center for their compassionate care during her last days, along with her primary care providers and specialists at UMass who have cared for her for years. In addition, her family would like to thank the entire Melanoma Clinic at Beth Israel Hospital who provided Ginny with comprehensive treatment for metastatic melanoma when she was in her late 70’s.

Ginny’s ashes will be interned at a later ceremony in Freedom, NH.
DIRSA - MORIN FUNERAL HOME, 298 Grafton Street, is assisting the family with arrangements.