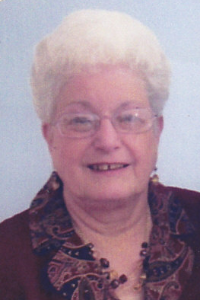 Lois Quinn, 85, of Chesterfield, Indiana passed away on Saturday, April 9, 2022 at Community Hospital in Anderson.
She was born in Anderson on February 10, 1937, a daughter of Lester and Mary (Hufford) Poling, both of whom preceded her in death.
Lois was married to James Quinn on December 20, 1959 in Anderson. They recently celebrated their 62nd wedding anniversary. She graduated from Anderson High School in 1955 in the same class as her husband-to-be. She worked a short time at Delco-Remy in Anderson, then became a stay-at-home mom to her four sons.
She was a long-time member in Sparklers Home Ec Club. She made quilted patchwork jackets for her daughters-in-law, and she created scrapbooks for her grandchildren that spanned their activities from birth through high school graduation. She was active for many years in the Ladies Compact Bowling League. She also researched and recorded her family history to pass down to her children and grandchildren.
She attended Edgewood Baptist Church in Anderson. In earlier years, she attended and played piano at Ovid Community Church.
Lois was known for being able to laugh at herself and to make others laugh, especially when playing a family-favorite game, Mexican Train Dominoes. She loved her family and her friends well, and she especially enjoyed attending her grandchildren’s basketball, baseball, and soccer games. Whenever at an outing, she would engage in lively conversations with even the slightest of acquaintances. Everyone who knew her would attest to the fact that “Lois never knew a stranger.”
She is survived by her loving husband, James Quinn, of Chesterfield and by four sons: Kevin (Cammie) Quinn of Lexington, Illinois; Gary Quinn of Chesterfield; Terry (Robyn) Quinn of Pendleton; and Larry (Crissy) Quinn of Anderson. She is also survived by seven grandchildren: Gregory (Kara) Quinn; Colleen Quinn; Christy Quinn; Preston Quinn; Peyton Quinn; Garrison (Aubrey) Quinn; and Brayden Quinn.
Funeral services will be held on Friday, April 15, 2022 at 11:00 AM at Rozelle-Johnson Funeral Service with Pastor Andy Lutz officiating. Burial will follow at Anderson Memorial Park Cemetery.
Visitation will be held on Thursday, April 14, 2022 from 4-7 PM at the funeral home.
Post online condolences at www.rozelle-johnson.com.