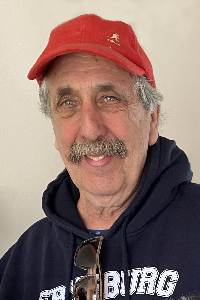 Jim was born on December 13, 1950, in Franklin, NH, to George and Claire (Bibeau) Falardeau. He grew up in Northfield, NH, graduated from Bishop Brady High School in Concord, NH, and went on to attend college at the University of Connecticut. Jim passionately built and restored homes and barns for more than 45 years.

In a philosophical conversation with his dear niece about why we are on this planet, Jim's answer was, "To have fun!" And that he did, with a twinkle in his eye and an unforgettable smile on his face. He was an exceptional human being who cared so deeply for his family, his friends, and his work, that you could just feel it emanating from him. He was gentle, selfless, and hilarious.

Jim loved life. In the winters, he would grab his skis and head to the slopes any chance he got. He grew up racing, coaching, and teaching skiing. As recently as this past winter, you could find Jim racing his buddies from top to bottom on black diamonds or going "slower than molasses in January" so that he could spend his time skiing and riding the chairlift with his kids, grandkids, nieces, and their children. Each February, Jim would shovel a path through his front yard, winding into the woods, because it brought him such joy to host his annual sledding party for his family, and friends who instantly became family to him. In the summers, he loved taking his family out on Crystal Lake to cruise around on his customized "Aquarondeck" pontoon boat. He loved the time he spent deep sea fishing, relaxing, and enjoying dinners with his loving wife, Gayle, on the deck, at their cottage in Southport, ME. In the fall, Jim could be found in his tree stand in his back woods, where he would go to "hunt" deer. His family joked that he should leave his gun behind and just bring a camera because he really was only out there to have quiet time in the woods and take in the beauty of nature. Each Thanksgiving, you could find Jim in the kitchen of the house he built covered in flour, crafting his famous homemade rolls while his favorite blues music played in the background. Later, he would be sitting at his handmade dining room table, toasting his beloved family, while he shared his most recent home brew with them. Year round, Jim relished his daily walks with his wife along the lake. Jim loved watching his grandchildren play sports. He would notoriously sit in the stands, making witty comments just loud enough to warrant either a smile from the refs or a threat from them to kick him out. He was beyond proud of his children and grandchildren. He was the first to compliment you. He was content. Jim loved with everything he had.

Calling Hours will be held on Thursday, April 14, 2022, from 5:00pm-7:00pm in the Carriage House at Wilkinson-Beane-Simoneau-Paquette Funeral Home, 164 Pleasant Street in Laconia.

In lieu of flowers, donations may be made to the Share Winter Foundation, www.sharewinterfoundation.org/donate to honor Jim's love of skiing, the outdoors, children, and equality.