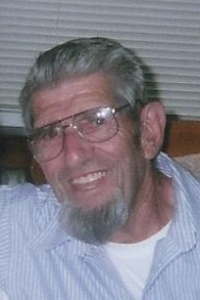 SPENCER: Roger Perron,88, of Spencer, left his life on earth on April 10th to be with his beloved wife, Gurlie in eternal life.

Roger was born in 1933 to Ludovic and M. Alice (Letendre) Perron. He graduated from David Prouty High School in 1952, then joined the Air Force serving during the Korean Conflict. When he returned to Spencer, where he was a lifelong resident, he worked as a licensed plumber and gas fitter. He was in business for himself, then worked many years for Thermo Engineering in Worcester MA. He also worked a second job pumping septic tanks in the famous Sooper Dooper Pooper Scooper so that his wife could be home with their daughters during their childhood.

His favorite pastime was mowing the neighborhood lawns on his 1942 Cub tractor which he rebuilt from the ground up. Roger spent many hours in his blueberry patch tending to his 200 blueberry bushes. He loved to make people laugh with his many stories and jokes. He spent many hours of his last two years entertaining the caregivers at Quaboag Rehab and Skilled Care Center and was rewarded with some midnight snacks.

Roger leaves behind his daughters; Darlene C Kruckas and her husband Robert of Spencer, Charlene Dacey and her husband Thomas of Spencer and Francine and her husband David of Southbridge, five grandchildren: Melanie (Michael), Joshua (Kristina), Thomas (Monique), Amanda (Joseph), and Matthew (Leanne), six great grandchildren: Zachery, Dylan, Wyatt, Gabriella, Madilynn and Easton. He was predeceased by his wife of 61 years, Gurlie and his sister Sr. Constance Perron.

A funeral Mass will be held on Wednesday, April 13 at 10 a.m. in Our Lady of the Rosary Church, 7 Church St., Spencer for all to attend. Calling hours are private. Burial will be in Worcester County Memorial Park, Paxton with Military Honors, after the funeral Mass. The J.Henri Morin & Son Funeral Home, 23 Maple Terr., Spencer is directing arrangements for the family.