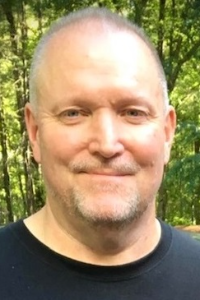 James L. Harkins of Wakefield, formerly of Woburn, was surrounded by his loving family as he passed away peacefully on March 28, 2022 at Melrose-Wakefied Hospital following several years of declining health. James, or 'Jimmy' as his family and friends called him, was 64 years old. Jimmy was the husband of Marietta (Ferrigno) Harkins, his committed companion of 37 years. Born in Winchester, James was the beloved son of Beverly (McCall) Harkins and the late Leo J. Harkins of Woburn.


Raised and educated in Woburn, Jimmy was a 1975 graduate of Woburn High School where he studied art and was in the Marching Band. In 1978, Jimmy enlisted in the United States Navy and proudly served in the Construction Battalion known as the Navy Seabees. He traveled to Spain and Newfoundland during his tour of duty and shared many wonderful stories of the things he had seen and done. Military Service was a big part of Jimmy’s life and during Desert Storm he enlisted in the Army National Guard and served 22 years before retiring. At one point during his enlistment, the state made an unusual deal with a Hollywood production company by offering the Massachusetts National Guard's assistance. Jimmy had the exciting opportunity to be a part of constructing the set for the movie The Crucible, which was filmed on Hog Island in Essex. Jimmy was an extra in the film, an experience he recalled fondly. Jimmy also worked for the MBTA as a bus driver and most recently he was employed by UTC Aerospace Systems in Peabody as a furnace operator in the production of aircraft parts, up until his recent retirement due to poor health.


Aside from his love and devotion to family, Jimmy had a lifelong passion for motorcycles and music. During his lifetime, Jimmy was the owner of several beautiful bikes including models from Harley Davidson, BMW and Bugatti. Equally passionate about guitars and banjos, Jimmy was always seeking out the latest addition to his stringed collection. He loved and appreciated a wide variety of music genres and would attend live performances whenever he could.
In addition to his wife Marietta, Jimmy is survived by his beloved children; Nathan Harkins-Oberbeck and his wife Kayleigh of Wakefield and Nole Harkins and his wife Nichole of Malden. He was the loving grandfather of his twin grandchildren, Lief and Leik Harkins-Oberbeck. James was the beloved brother of Maureen MacDonald and her husband Edward of Ossipee, NH, Ellen Frenette and her husband Dennis of Hudson, NH and Carolyn Froding and her husband Robert of Andover, MA. He is further survived by many adored nieces, nephews, cousins and extended family who loved him very much.


Family and friends are respectfully invited to attend calling hours at the McLaughlin - Dello Russo Family Funeral Home, 60 Pleasant St., WOBURN, Thursday, April 7th, from 4 to 6 p.m. with a prayer service beginning at 6 p.m. Interment services will be private.