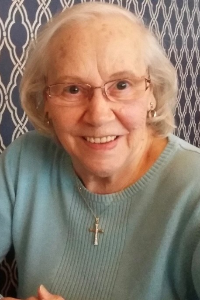 SPENCER: Rita E. Fortin, formerly of Ash St., Spencer, died a few weeks shy of her
88 th. birthday at Blair House in Worcester.
Her husband, Armand Fortin died in 2009.
She is survived by four daughters; Deborah Johnson (Paul), Brookhaven,
GA, Anita Trepanier, Brookfield, MA, Jeannette Fortin, Spencer, MA,
Laura Merwin (Michael), Ware, MA, and son, Michael Fortin (Elizabeth),
Sturbridge, MA. She also leaves 8 grandchildren, as well as
great grandchildren, nieces, nephews and her sister, Beverly Balbi.
She was predeceased by her son, Edward Fortin (2015), three brothers:
Arlton, Harlan and Irving Hull, and sister, Joyce Laverdiere.
Rita was a farmer’s daughter born in northern Vermont to Clayton and
Ethel (Nolan) Hull. She was a proud American whose roots can be
traced back many generations with ancestors who fought for this
country in the American Revolutionary War and every war since,
including the Korean War that claimed the life of her beloved brother,
Art Hull.
Rita had a passion for country music and enjoyed traveling to see her
favorite artists. She never met a stranger and could start a
conversation with everyone she met. A long-time homemaker, Rita
was a talented seamstress and crafter. She had a remarkable memory
for family member’s and friend’s birthdays and anniversaries.
A private celebration of Rita’s life will be held at a later date. In lieu of
flowers, memorial donations may be made to the Alzheimer’s
Association, 309 Waverly Oaks Rd.,
Waltham, MA 02452.
J. Henri Morin & Son Funeral Home, 23 Maple Terr., Spencer, MA is
directing arrangements for the family.