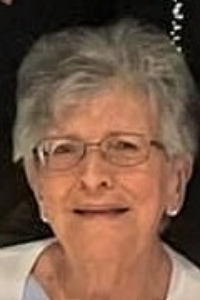 SPENCER: Theresa L. (Ethier) Lee, 88, of Howe Village died Sunday, March 27 in Overlook Masonic Home after an illness.
Her husband George J. Lee, Jr. died in 1997. She leaves three sons; Timothy P. Lee and his partner Stephen Payson of Worcester, Daniel J. Lee and his wife Diane of Holden and Kevin R. Lee and his wife Valeri of Sunset Beach, NC, a daughter Kristen A. Lemieux and her husband Stephen of Sturbridge, 10 grandchildren, 10 great grandchildren, her sister-in-law Carol Nelson and her husband Garry of Spencer and her former daughter-in-law Gail Andrew and her husband Glenn of Brewster, two nephews, a special cousin Paul Guerin and his wife Cindy of Yarmouthport and close family friends Joseph and Wendy Beauvais of Spencer.
Theresa was born in Spencer, daughter of Leo J. and Aurore J. (Geoffrion) Ethier. She graduated from David Prouty high School in 1952. She was a clerk for many years at the former Shawmut Bank before retiring. After retiring she worked at Spencer Flower Shoppe and Appleblossoms for several years. She was a member of Mary, Queen of the Rosary Parish. She enjoyed bingo, the casino, trips to Atlantic city and spending time with her family especially when they were all together at the Cape.
The funeral will be held on Friday, April 1 from J. HENRI MORIN &SON FUNERAL HOME, 23 Maple Terr., Spencer with a Mass at 10:00 AM in Our Lady of the Rosary Church, 7 Church Street, Spencer. Burial will follow in Mary, Queen of the Rosary Cemetery. Calling hours are Thursday, March 31 from 4:00-7:00 PM in the funeral home. In lieu of flowers memorial donations may be made to Overlook Hospice, 88 Masonic Home Road, Charlton, MA 01507.