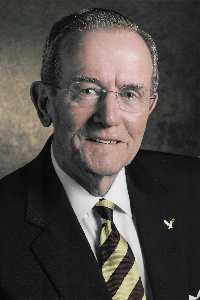 Born in Cambridge, MA on January 21, 1935 he was the proud son of Irish immigrants Stephen and Nora Joyce of Dorchester, MA.

Jack grew up in Dorchester with his brother Stephen and his three sisters Mary Theresa, Barbara and Patricia. He spent two years in the U.S. Navy during the Korean War as a corpsman at the Chelsea Naval Hospital. He then fulfilled what seemed to be an impossible dream for a kid from Dorchester by starting a college career at Boston College through the GI Bill. Upon graduation he received the award given to the senior who best represented the school’s motto of Ever to Excel.

Thus began a life-long passion for Boston College and the Boston College community leading to among other roles, his Presidency of the Alumni Association and his and his wife Nancy’s roles as Founding Patrons of the McMullen Museum of Art. Jack is most well-known for the launch and successful development of the Boston College Club which has brought a place of celebration, camaraderie and business to alumni and friends. Over the past 24 years, the Club has provided scholarships to over 100 young Boston residents to become students at Boston College.

Among his proudest achievements was the conferral of an Honorary Degree in Business Administration from Boston College in 2016 making him an extremely proud, “triple eagle.”

Jack retired at 85 from a long and distinguished career in the financial services industry at Alex Brown and Co. Raymond James as Managing Director. His 55 year career included ups and downs which he weathered with his customary determination and optimism. Through it all, he maintained the highest level of integrity.

Outside of his busy career, Jack was very active serving as Chairman of the Board of Catholic Charities of Boston and Newton Country Day School of the Sacred Heart. Jack was also a Knight of Malta and a Knight of the Holy Sepulchre. Jack was also active in his local parish, St. Paul’s of Wellesley, MA.
Jack was at his best surrounded by friends and family especially at his much loved Cape Cod, where he enjoyed golfing with his buddies at Cranberry Valley Golf Club in Harwich or at home at Wellesley Country Club. He was also a lifetime member of Ballybunion Golf Club in County Kerry, Ireland. He also loved to cheer on any Boston College sports team.

Jack’s generosity knew no limits- he was the first to extend a gesture of support to those who needed a hand, a favor or just some cheering up. He was always “the life of the party”. He could get the crowd roaring in an instant, teasing his friends and telling stories. He found pleasure in introducing people he thought should know each other and he enjoyed mentoring many young men and women starting college or their careers.

As successful as he was, Jack was most proud of his family. He is survived by his beloved wife Nancy (McElaney) Joyce of 54 years, his daughters Nancy Joyce and her husband Rene Jarquin of Wellesley, MA and Kathleen Joyce Coney and husband Edward Coney of Oak Hill, VA. He is also survived by four adored and adoring grandchildren Nora and Julia Jarquin and Andrew and Trevor Coney who called him “Paw”. He is survived by his two sisters, Barbara (Joyce) Foley of Milton and Patricia (Joyce) Scally and husband Ralph Scally of Hingham and many loved nieces and nephews. He is predeceased by his sister, Mary Theresa Joyce, his brother Stephen Joyce, sister-in-law Catherine Joyce and his brother-in-law John P. Foley. He also leaves behind his sister-in-law, Marie (McElaney) Linz and her husband John and brother-in-law Andrew McElaney and wife Kathleen (McConnell) McElaney and many loved nieces, nephews, and friends.
He was a true example of the Jesuit motto “a man for others.”
The Joyce family would like to extend tremendous gratitude to the outstanding caregivers – Julio, Alberto, Cecelia, Juan, Myra, and Osyris- that cared for Jack over the past year. Their love and selflessness made a huge difference in Jack and Nancy’s quality of life.

Visitation will be at the George F. Doherty & Sons Funeral Home, 477 Washington St. Wellesley, MA 02482 on Saturday, March 26, 2022 from 2-5pm and Sunday March 27 from 2-4pm and from 7-9pm. A Funeral Mass of Christian Burial will be celebrated at St. Ignatius Church 28 Commonwealth Ave, Chestnut Hill, MA 02467 on Monday, March 28th at 11:00 am. The Mass will be live-streamed at  www.youtube.com/watch?v=d4BFRY7xgRc. Interment will be held after the Mass at Woodlawn Cemetery in Wellesley, MA.