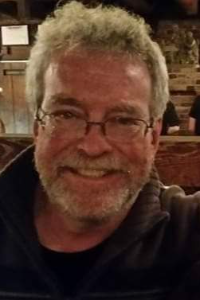 BROOKFIELD; Daniel F. Leahy, Jr., 56, of Brookfield, a loving family man and
devoted friend, died Monday, March 21st after a courageous battle with
Parkinson’s Disease/Lewy Body Dementia. He leaves his daughter,
Samantha J. Leahy-Burgess and her husband Charles of Brookfield, two
grandsons, Wyatt and Colten, three sisters; Doreen Brooks (Mark) of
Spencer, Susan Mallette (Scott) of New Braintree, and Coleen May (Bill) of
Leicester as well as aunts, uncles, nieces, nephews as well as several
cousins.
Born in Worcester, he was the son of Daniel F. & Rhea (Bercume) Leahy, Sr.
He graduated from DPHS in 1983 and WITI in 1985. Prior to his illness, Dan
was a Project Manager-Engineer at C.B. Blair Development Corp. He
previously worked at the Brookfield Transfer Station, was a former member of
the Brookfield Board of Health and Brookfield Planning Board. He was a
proud member of the Knights of Columbus. Dan loved the outdoors, his cats,
traveling (especially to Maine and new places), playing cribbage and chess,
U.S. history, family dinners, celebrations and holidays and the New England
sports teams, especially Red Sox and Patriots.
The Funeral will be held Saturday, March 26 from the J. HENRI MORIN &
SON FUNERAL HOME, 23 Maple Terr., Spencer with a Mass at 10 A.M. in
Our Lady of the Rosary Parish, 7 Church St., Spencer. Burial will follow in Brookfield Cemetery,
Brookfield. Calling hours are Friday from 4-7pm in the Funeral Home. In lieu
of flowers donations can be made to the Town of Brookfield EMS, 4 Central
St. Brookfield, MA 01506.