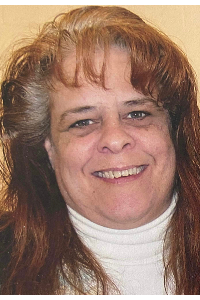 Holly was born May 6th, 1961 in Boston, MA. She was raised by her loving parents Robert W. Griffin and Gloria A. Gummeson of Medford, MA.

Holly was a former resident of Medford, MA and St. Clairsville, OH. Holly worked as a nurse’s aide for many years. She was a 1979 graduate of Medford high school. During her life, Holly attended First Community United Methodist Church in Medford, MA and was a part of Rainbow girls. Holly was also a involved with the Rhythmic Choir and Youth group at FCUMC. In her spare time, Holly enjoyed gardening, completing jigsaw puzzles, and cheering on the Patriots.

Holly was preceded in death by her parents, Bob and Gloria. Paternal grandparents Lester J. and Martha (MacBride) Griffin and maternal grandparents Gunnar and Levinia (Miller) Gummeson. In addition, Holly is preceded in death by her late brother in law’s, Kenneth Sousa and Scott Mackenzie, dear cousin and friend Rick Morris, in addition to many Aunts, Uncles, and other family members.

Holly is survived by her children, Shannon Pearson of Ohio, Sean Quinn (Tiffany Allder) of Haverhill, and Stephanie Cameron (Nathan) of Ohio; her grandchildren Patrick, Christian Jr., and Jaycob Pearson of Ohio, Madison and Scott Quinn of Haverhill, and Harper Cameron of Ohio; her sister, Lynn Griffin Sousa of Tewksbury, nephew Robert (Heidi) Sousa of Salem, and Andrea (Chris) Carney of California.

The family would like to express their gratitude and appreciation to the Haverhill Fire Department, Haverhill Police Department, firefighters from Lawrence, Methuen, and Salem, New Hampshire, State Police Fire & Explosion Investigation Unit attached to the State Fire Marshal’s office, and State Police assigned to the Essex District Attorney’s office investigated the tragic fire on Wednesday night.

In Lieu of flowers, donations in Holly’s memory may be made to the family.

Holly’s care and arrangements have been entrusted to the Beals-Geake-Magliozzi Funeral Home of Medford. For additional information, please visit, www.magliozzifuneralhome.com.