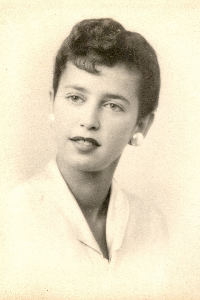 Jennie was born November 4, 1939 and raised in the Bronx, New York; no matter where she lived she always considered herself a city girl. In 1959, at the age of 19, she married Charles Cintron and moved to Boulder, Colorado. There, a fish out of water, living in a quonset hut, she made a home, and in June of 1960 had a son, Christopher.

After a few years in Colorado the next stop was New Haven, Connecticut. No quonset hut this time but a simple apartment where, in 1963 she had a daughter, Kelly Sue. Now complete, the family moved to Storrs, Connecticut for a number of years before once again moving, this time to Winchester, Massachusetts. The final move for the family was to Reading, Massachusetts, where they bought a house.

Jennie was a wonderful homemaker but also worked outside of the house in various industries. Her favorite job was as a teacher's aide at Birch Meadow Elementary School in Reading, Massachusetts.

Jennie was quite shy but she enjoyed socializing with friends. Dinner parties, fine dining, movies, beach outings, and the theatre were some of her favorite activities. She also bowled in a league, played tennis and racquetball, and golfed. Having grown up in the Bronx, dancing was a particular favorite and she was quite accomplished.

Her true passions were cooking for family and friends, and travel. She hosted many dinner parties and after her divorce, became famous for her Christmas Eve dinners. Jewish, she made a hell of a Christmas spread and invited all the Jews and “orphans” (those with no family plans) in her and her children’s lives for a celebration of food and friends.

She traveled the world. Italy, England, Argentina, Jamaica, Greece, Belize, Puerto Rico, Nova Scotia, and Japan, to name a few. She also saw a great deal of the US on road trips, first from New York to Colorado, Connecticut to Canada, and Massachusetts to Louisiana.

Jennie was funny, kind, and a true friend. She loved animals, had a dog as a child and many cats over the years, and could always be counted on to support friends or family if needed.

Jennie is survived by her two children, Chris and Kelly, her nieces and nephew, Jackie Duddy, Sue Sellers, and Michael Girard. Her cousins, Bonnie Brody, Mindy Walters, Len Dorfman, Melanie Feldstein, and Andrea Piccolo. She is also survived by one of her favorite people, her younger brother Bert Singer.

There will be a gathering to celebrate Jennie at her daughter’s house on Sunday, March 20th from 2 - 4pm.

Donations in honor of Jennie can be made to the International Fund for Animal Welfare, www.ifaw.org