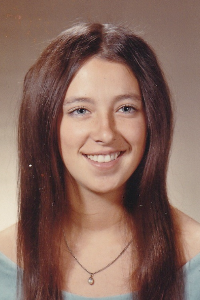 She was born 13th March, 1955 in Newton, MA, the second child of Donald and Norma (Johnson) MacPherson, and was raised in Walpole, MA, and Chatham, NH. Paula attended the Walpole school system, was a cheerleader in both junior and senior high schools, and had a large network of friends.

As a child, Paula was so mischievous and energetic that an uncle exclaimed that her initials, instead of being PDM, should be PDQ - “pretty darn quick”, and the nickname “PD” stuck.

During her youth, she enjoyed sewing, knitting, baking, and playing street hockey with her friends. She joined the CampFire Girls as a Bluebird, and remained close to her CampFire sisters through school and adulthood. A bad fall and a serious back injury in her junior year of high school put an end to her cheerleading days, and would be something that continued to plague her – yet she persevered, smiling and without complaints.

After graduating, Paula became a permanent resident of the Chatham area, and settled in Stow, ME after marrying E. Wayne McInnis, with whom she had her two children. They subsequently divorced. Over the years, in addition to being a full-time homemaker, Paula was active in the local schools, ran a small business - “Sweet Polly's Homemade Candies”, and worked outside the home at Fryeburg Academy and Yield House Furniture. Above all, Paula's great joy in life was taking care of her family and loved ones, and she often put their needs and wants above her own.

Paula was pre-deceased by her parents and her sister Laurie J. McInnis. She is survived by her daughter Shannon D. McInnis and her partner Jacob McKenzie of Chatham, son Benjamin W. McInnis and partner Sarah Farrington of Madison; niece Allison E. Bergeron and husband James of Bridgton, ME; grandsons Griffin T. Thompson and Angus P. Thompson of Chatham; and brother Douglas D. MacPherson of Berlin.

A funeral service will be held 11:00 AM, 18th June, at the Chatham Congregational Church, with burial in the Chatham Center Cemetery to follow.

In lieu of flowers, donations in Paula's memory can be made to Androscoggin Hospice House, 236 Stetson Road, Auburn, ME 0421