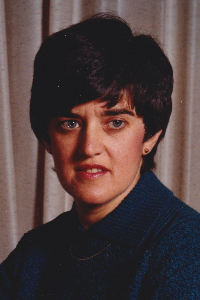 Judith A. (Hierholcer) Zajac, 78, of New Bedford died Friday, February 18th at Charlton Memorial Hospital in Fall River after an eleven year battle with cancer. She was the wife of Peter T. Zajac for over forty years.

Born in Acushnet she was the daughter of the late William F. and Helena M. Hierholcer and a lifelong resident of New Bedford. Judy was a devoted communicant of Our Lady of Guadalupe Parish and formerly sang in the church choir. She was also a Girl Scout leader.

She graduated from New Bedford High School in 1961 and received her Bachelor degree from Framingham State College in 1965. Later on Judy earned a Master's degree from Bridgewater State College and taught in the New Bedford Elementary School system as a first grade teacher for thirty-seven years, retiring in 2002. For a good number of years Judy taught first grade at the Hathaway School right next to her future sister-in-law Rosemary Bowman who was a second grade teacher. Rose and Judy became good friends and it was Rose who introduced Judy to her brother Peter. Once Peter met Judy, that was it! Endless thanks to you Rosemary.

Judy loved to read and could read an entire book in the time that most others took to read only a chapter or two. Going out to eat with her retired teacher friends also brought Judy much happiness, but trips to the Dairy Maid or other ice cream shops was the thing that Judy really loved to do. Visiting with family and friends and going for rides also brought joy into her life. Let's not forget all the great Thanksgiving turkey dinners prepared by her sister Lucy. Later in life Judy and Peter spent many hours watching the professional golfers competing for golf titles and keeping track of who was playing Titleist golf balls.

Judy always enjoyed a telephone call from cousin Margaret Kennedy who was greeted with, hello Sunshine, because Margaret brought sunshine to all whom she met. Judy was much like Margaret, radiating happiness to others in her own quiet and special way.

Judy was a humble, loving and caring person, quick to come to the aid of anyone in need. She was generous with both her time and money and supported numerous charities. She always tried to avoid attention to herself, rather letting others be in the spotlight.

Her husband Peter often brought a smile to her face with his non-stop jokes or just by being his normal self.

Her two children made Judy's beautiful blue eyes sparkle and caused her to smile with a grin from ear to ear; she loved them so much and was so proud of their many accomplishments. Just a phone call from either of them brought her instant happiness.

Judy was a loving and devoted wife and mother and a woman of faith. Daily Holy Mass on the TV plus her daily prayers and devotions were a must.

Judy is survived by her husband Peter, her son, Dominican Father Jordan Zajac, O.P. of Providence, RI, her daughter Christina Tiesi and son-in-law Michael Tiesi of Harrison, NY, her sisters Mary C. Valentine and Lucy M. Reynolds, a brother William Hierholcer, all of New Bedford, brothers-in-law and sisters-in-law Henry and Kathleen Zajac of Mattapoisett, Mort and Barbara Zajac of Mashpee, Rosemary Bowman of Mattapoisett and Janet Shartle of Fairhaven plus many nieces and nephews.