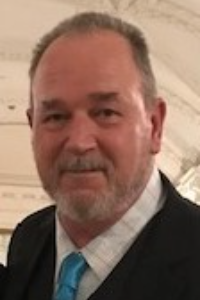 Arthur R. Lee, 66, loving husband of Christine (MacRae) Lee, passed away after a six year struggle with Lewy Body Dementia, at the Rose Monahan Hospice Home, in Worcester. Arthur was born in Madison, West Virginia to his parents, the late E. Ray Lee and Mary Lee. He is survived by his son Kevin, his wife Caitlin, and their children Ian, Connor, Ben, and Elizabeth of Plainville; and his son David, his wife Jolin, and their daughter Nora of Quincy. He is also survived by two brothers, Robert, of Stagecoach, Tx, and Barry, of Waller, TX. Besides his parents, Arthur is predeceased by two brothers, Leslie and Rocky.

Arthur was passionate about music and oil painting. He was a partner in the musical duo “Bill and Art,” with his good friend Bill LaPlant, for many years, often performing at local coffee shops and various venues. A soulful baritone voice, Arthur enjoyed performing with the Franklin Chordsmen, and well as the choir, and several musicals at the Medway Community Church.

He was a prolific artist, and enjoyed three successful art shows at the Artist Studio and Gallery, at Patriot Place, in Foxboro, MA., with the proceeds being donated to the Lewy Body Dementia Association to research his illness.

He was a devoted father, often giving his time and talents to organizations his sons belonged to. He was a founding member of boy scout troop 367, serving as scoutmaster, and was a co-den leader along with his wife, for his son’s cub scout den, also serving as a cub master. Arthur coached baseball teams for both his sons over the years.

Arthur loved his family, and especially savored spending time with his cherished grandchildren, and enjoyed many family vacations together.

Arthur retired in 2013 after working 33 years in the gas industry.

Relatives and friends are invited to attend a celebration of life at the Medway Community Church, 196 Main Street in Medway on Saturday, May 14th at 11 a.m.

Donations can be made to the LBDA.org in Arthur’s memory.

Arrangements are under the care of the Ginley Crowley Funeral Home, Medway (www.ginleyfuneralhomes.com).