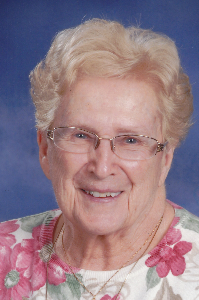 Miriam A. Smith, 95, of Daleville, passed away peacefully in her sleep on January 16, 2022.
Mrs. Smith was born in Anderson to Edward and Eva Reynolds on March 12, 1926 and was a 1944 graduate of Anderson High School.
She was a lifelong member of the First Baptist Church in Anderson, where she was active as a choir member for many years. She served on the Deaconess Board and was a member of the Olivet Sunday School Class. Until her hands wouldn’t allow it, she enjoyed needle point and other crafts.
She and her beloved husband of 65 years, Ralph, enjoyed traveling, taking numerous trips abroad both for pleasure and as part of Lions Eyeglass Missions throughout the world. They hosted numerous Exchange Students in their home over many years, many of which have stayed in touch and returned for visits.
Miriam was preceded in death by her parents, four brothers and three sisters, her husband Ralph and most recently her son, Dennis.
She is survived by her son, Rick (Janice) Smith; daughter, Karen(Steve) Wilson; daughter-in-law, Mary Smith; grandchildren, Ryan, Chad and Ashli Smith, Amber (Jon) Ryder, Nick ( Kourtney) Wilson, Jennifer (Brandon) Jessie, Suzanne (Jarrett) Stanley, Kathleen Smith; adopted grandson, A.J. Billiter; eight great grandchildren; numerous nieces and nephews.
Funeral services will be held on Friday, January 21, 2022 at 1:00 PM at First Baptist Church, 907, North Raible Avenue, Anderson. Burial will follow at Anderson Memorial Park Cemetery.
Visitation will be held at the church on Friday beginning at 11 AM.
Memorial contributions may be given to First Baptist Church.
Funeral services are being handled by Rozelle-Johnson Funeral Service.
Post online condolences at www.rozelle-johnson.com.