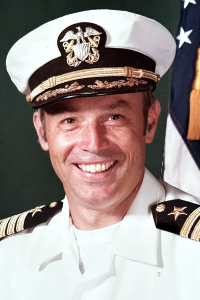 Born on Jan 15, 1936, Gordon hailed from Tenafly, NJ. He was the oldest son of William and Dorothea Lange. Gordon’s German father worked as a Wall Street banker. His mother, who was born in Argentina, immigrated as a teenager by herself from England to New York and performed as a dancer on Broadway before marrying and raising her boys.

After graduating from Tenafly High School in 1953, Gordon chose to turn down an Ivy League college to attend the U.S. Naval Academy as a Midshipman in Electrical Engineering. This decision symbolized his life as an intellectually curious man who had the mind of an engineer and the heart to serve others. His subsequent exciting naval career motivated several of his children and grandchildren to enter the Navy as well.

Upon commissioning as an officer in 1957, Gordon spent a short time on the destroyer USS Massey (DD-778) in Norfolk, VA before starting Submarine School in Groton, CT in 1958. During one of his visits home to Tenafly, his younger brothers, Ian and Gary, introduced Gordon to their new, pretty high school English teacher named Carole Carlson from Ossining, NY. Carole had recently graduated from Vassar College and Columbia University. It was love at first sight! Gordon and Carole were married at Trinity Church in Carole’s hometown on the Hudson River on May 31, 1959. They went on to share a special marriage that lasted 61 years.

As newlyweds, the Langes moved to the “Submarine Capital of the World” Groton. They rented their first home together in the summer community of Groton Long Point, CT and Carole taught English at Fitch High School. Gordon’s first submarine tour of duty was aboard USS Conger (SS-477). But, his time on USS Conger was cut short when he was selected by Admiral Rickover for the new nuclear power submarine program. During the course of Gordon’s nuclear power training from 1960 to 1962, Gordon and Carole moved to Noank, CT, and their first of four children was born.

Gordon served on his first nuclear submarine, USS Shark (SSN-591), back in Norfolk. He then returned to Groton, living in Waterford first and eventually building a house in Noank. He served on USS Casimir Pulaski (SSBN-633), USS John Marshall (SSBN-611), COMSUBDEVGRU 2 Staff, and USS Greenling (SSN-614). At the end of this busy span from 1962 to 1971, Gordon was promoted to the rank of Commander.

In 1971, Gordon was selected for command of USS Guitarro (SSN-665), following her accidental sinking pierside in Vallejo, CA. The Langes quickly packed up and drove across the country to California, with four kids, two cars, and a dog. Under Gordon’s leadership, USS Guitarro was fully restored at Mare Island, CA and changed home ports to San Diego, CA in 1972. The Lange family enjoyed two years living on the idyllic island of Coronado, CA.

From San Diego, Gordon relocated his family back east to McLean, VA, in 1974, where he was promoted to Captain and worked for the Bureau of Personnel Management and the Secretary of the Navy in Washington, DC. In 1978, Gordon headed west again, this time to Kailua, HI, to serve as a primary Department Head for Commander, Submarine Forces Pacific. While in Hawaii he earned his MBA from Pepperdine University. In 1980, Gordon returned to familiar Groton, CT to command the submarine tender USS Fulton (AS-11). Following his successful tour of duty on USS Fulton, he ventured to Silverdale, WA to assume his final major commands, dual-hatted as Commodore of Squadron SEVENTEEN and Submarine Group NINE at the new Bangor Trident Submarine Base from 1982 to 1985.

After his last child graduated from high school in Silverdale, Gordon eagerly accepted a “twilight tour” at the Naval Academy, where his Navy career had launched. He relished his job there as Director of the College of Math & Science, Admissions Chairman, and Director of Graduate Education from 1985 to 1987. He led sailing trips with midshipmen, sponsored student basketball players, and had fun living on the campus in downtown Annapolis, MD.

Gordon retired from the Navy in 1987 after 30 rewarding years. He and Carole purchased a beautiful home in the woods of Annapolis and Gordon worked as the Director of Computer Systems for Lockheed-Martin in Baltimore for nine years. They enthusiastically explored Europe with friends each year.

In 1996, following Gordon’s second and final retirement, the Langes elected to spend their remaining days in their appropriately named “Sea Story” beach house in Groton Long Point. As Gordon was not one to ever truly retire, he immersed himself in service to his church and the Groton Long Point, Noank, and Groton communities. Gordon was elected to the Groton Representative Town Meeting (RTM) as the District 8 Representative from 1997 to 2004. In this capacity, he focused on finance and development of new public schools. He also served on the Groton Long Point Association Board of Directors for twelve years as Vice President and Zoning Officer. An avid golfer, Gordon led the fundraising, design, and all-volunteer labor for construction of a new putting green for Groton Long Point residents. After 15 years of personally maintaining the green like his own yard, the community gratefully acknowledged his effort and passion and dedicated the green in his honor during a ceremony formally naming it “Gordon’s Green.”

Born a tinkerer and real-life Energizer Bunny, Gordon was a quintessential “Renaissance Man” who pursued endless hobbies – from refurbishing vintage Mustang convertibles, to germinating his own seeds for his gardens, to sailing, to rebuilding antique clocks, to playing golf, to skiing, to creating and collecting furniture and art, to you name it, he learned about it and did it! And, he enjoyed sharing his skills with others. Gordon also managed to coach soccer teams and be very involved in his children’s lives, despite the many moves and years at sea. An avid reader as well, two of his favorite books included “Blind Man’s Bluff” and “The Hunt for Red October,” which were based on missions he had performed on fast attack submarines during the Cold War.

After 85 adventurous years, Gordon will be buried this summer with full military honors at Elm Grove Cemetery, beside his precious Carole and overlooking the boats on the scenic Mystic River. In lieu of flowers, donations in memory of William Gordon Lange may be made to U.S. Naval Academy Foundation, 274 Wood Road, Annapolis, MD 21402 (www.usna.com/support) or to Saint Andrew Presbyterian Church, 310 Fort Hill Road, Groton, CT 06340 (www.sap-ct.org).

The Lange children would like to express gratitude to the staff at Academy Point Mystic as well as to Lee Luthuli, Anna Martin, Cindy Young, and all the healthcare workers who compassionately cared for their father in his last few years.