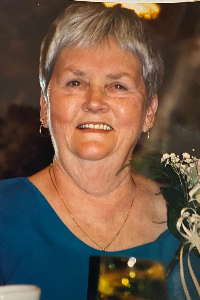 Mildred “Millie” (Harrington) Tortorella passed peacefully in her sleep Thursday, January 13, 2022 at the age of 89.
Mille was born and raised in Augusta, ME on August 26, 1932 to the late Roger and Mary Harrington. She was educated at St. Mary’s Elementary School and attended Cony High School in Augusta where she graduation in 1950. After high school, Mildred attended the Augusta General Nursing School and upon completion of her three-month affiliation course at Boston Lying-In Hospital in Boston, she returned to Maine where she completed her nurses’ training at Central Maine General School of Nursing in Lewiston, ME in 1953.
While attending nursing school in Lewiston, she met and fell in love with Frank Tortorella Jr. from Malden, MA who was in the Navy stationed in Brunswick, ME. The two fell in love and in 1956 married and raised their family of six children in Malden.
Upon arriving in Malden, Mildred went to Malden Hospital to apply for a job and secured a nursing position on the spot! While bringing up her children, she continued her nursing career and was beloved by her patients, many asking for her to return as a private duty nurse.
Mildred and Frank loved going to their “camp” in Maine with their children year round.
After the devastating loss of her husband in 1990, Millie found happiness in her grandchildren and traveling with her family and friends. She loved her yearly trips to Houston to visit her son Frank to attend the rodeo!! As more and more grandchildren came, she cherished each one and was so proud of all their accomplishments. She enjoyed working on word search puzzles and watching favorite shows like Golden Girls, Murder She Wrote and Columbo with her family.
She was the strength of her family.
Mildred was predeceased by her loving husband of 34 years Frank Tortorella Jr. She was the cherished mother to her six children, Leonora Tortorella Tumblin and her husband John of Everett, Frank R. Tortorella of Houston, TX, Mildred J. Tortorella Collins and her husband Lawrence of Malden, Anthony Tortorella of Malden, Amy Tortorella Barbosa and her husband Edson of Malden and Ellen M. Tortorella Batista and her husband Joao of Malden. Mildred was the dear sister of Mary Harrington of Winthrop and the late Albert Harrington. She was the cherished grandmother to her 12 grandchildren, Jonathan and Michelina Tumblin, Frank, Charlie, Nina, Robert, Aidan and Paul Collins, Nathaniel and Emilee Barbosa and Nicolle and Maximiano Batista. Mildred is also survived by special family friend Elaine Bossi and many nieces, nephews and friends.
A special thanks to Concerto Care of Woburn.
A funeral service will be held at the A. J. Spadafora Funeral Home, 865 Main Street, Malden on Thursday, January 20th at 11:30 am. Relatives and friends are respectfully invited to attend. Visitation will be held from 9-11:30 am on Thursday morning prior to the service. Interment will be in Woodlawn Cemetery, Everett.
In lieu of flowers, donations in Mildred’s memory may be made to your favorite charity.